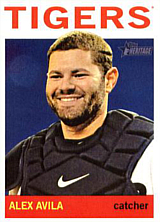 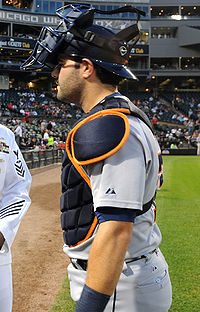 Alex Avila is a stocky, solid receiver and excellent handler of pitchers. With a breakout season in 2011, including an All-Star Game appearance, his future appeared very bright; however, his hitting numbers steadily decreased since, while his strikeout tendency markedly increased.

Avila played 60 games as a freshman in college with the University of Alabama, primarily at designated hitter. As a sophomore, he started all 57 of the team's games, mostly at DH again, but with time at third base and first base. As a junior, Avila was moved to catcher, and his draft stock rose as a result. He was selected in the 5th round of the 2008 amateur draft and signed by scout Jim Rough. He made his pro debut that summer in the Midwest League.

Just a little over a year after he was drafted, Avila had two hits in each of his first three major league games with the Detroit Tigers in 2009. The 6 hits included 4 doubles and a home run, hit against the Minnesota Twins' Anthony Swarzak in his second big league game on August 7th. After 7 seasons with the Tigers, he left as a free agent following a disappointing 2015 season during which he hit only .191 in 67 games and lost his starting job to James McCann. On November 25th, he signed a one-year contract with the Chicago White Sox to serve as the back-up to Tyler Flowers, replacing Geovany Soto who had filled the role the previous year. He played 57 games in 2016, hitting .213 with 7 homers and 11 RBI, then the following December, returned to the Tigers on a one-year deal.

The return to Detroit marked a re-birth for Alex, as he hit .274 in 77 games, his highest average since 2011; he also had 11 homers. With the Tigers rebuilding, they decided to take advantage of his regained value to package him, along with reliever Justin Wilson, in a deal to the Chicago Cubs for prospects Jeimer Candelario and Isaac Paredes. Avila's acquisition turned out to be a strategic move when on August 9th, the Cubs had to place starting catcher Willson Contreras, who had been their best player, on the disabled list with a hamstring injury. Alex inherited the starting job as a result. He hit .239 in 35 games, with 3 homers and 17 RBI. He also singled in his only at-bat in the postseason, against the Los Angeles Dodgers in the NLCS. On January 31, 2018, he signed a two-year contract with the Arizona Diamondbacks. In two years in the desert, he batted a meager .184/.324/.358 in 143 games, sharing catching duties with a cast of characters including Caleb Joseph, Carson Kelly, Jeff Mathis and John Ryan Murphy. Prior to the 2020 season, he signed with the Minnesota Twins.

He is the grandson of scouting legend Rafael Avila and cousin of Nick Avila. His brother, Alan, was drafted by the Tigers in the 47th round of the same 2008 draft Alex was drafted in, but went on to play at Nova Southeastern University. Avila's father, Al Avila, was the GM of the Daytona Beach Admirals in 1987, head coach at St. Thomas University and worked in the front offices of the Florida Marlins and Detroit Tigers before becoming the Tigers' GM in 2015.