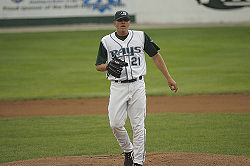 Pitcher Jake McGee was once rated one of baseball's top 20 prospects. His cousin Josh Walker played one season in the minors.

McGee was selected by the Tampa Bay Devil Rays in the fifth round of the 2004 amateur draft. He was signed by scout Fred Repke, turned down a baseball scholarship to UNLV and made his pro debut that summer with the Princeton Devil Rays. He was named the team's Pitcher of the Year as he was 4-1 with a 3.97 ERA and struck out 53 batters.

In 2005 with the Hudson Valley Renegades, he was 5-4 with a 3.64 ERA with 89 strikeouts, second-best in the New York-Penn League behind Wade Davis. Baseball America rated him as the NYPL's #9 prospect, between Garrett Olson and Tyler Greene. He moved up to the Southwest Michigan Devil Rays in 2006 and was 7-9 with a 2.96 ERA. His 171 strikeouts were tops in both the Midwest League and the Devil Rays organization. He was named Southwest Michigan Pitcher of the Year as well as the Midwest League All-Star left-handed starter (Nick Adenhart was the right-hander) even though Chi-Hung Cheng had a better record and ERA. He was 10th in the MWL in ERA. Baseball America listed him as the league's #6 prospect after Jay Bruce, Cameron Maybin, Justin Upton, Colby Rasmus and Adenhart. They also ranked him as the 37th-best prospect in baseball.

McGee began 2007 with the Vero Beach Devil Rays and was 5-4 with a 2.93 ERA and captured the Florida State League strikeout title with 145. He finished second to Josh Outman in ERA. He was named to the FSL All-Star team. He was once again his club's Pitcher of the Year. In August, he was promoted to the AA Montgomery Biscuits, where he went 3-2 with a 4.24 ERA and 30 strikeouts in 5 starts. He was 4th in the affiliated minors in strikeouts behind Gio Gonzalez, Will Inman and Matt Maloney. He also started two postseason games for the Biscuits, who went on to win the Southern League title. Baseball America listed McGee as the league's #3 prospect behind Bruce and Maybin as well as #15 in all the minors.

In '08, Jake began 6-4 with a 3.94 ERA for the Montgomery Biscuits before Tommy John surgery ended his season. Baseball America still ranked him as the #16 SL prospect, between Iván DeJesús Jr. and Angel Salome. Returning to the diamond on a rehab stint, he was 0-2 with a 3.52 ERA for the GCL Rays and 0-2 with a 6.45 ERA for the Charlotte Stone Crabs.

Back for a full season in 2010, Jake split time between Montgomery (3-7, 3.57, 100 K in 88 1/3 IP) and the Durham Bulls (1-1, save, 0.52, 27 K in 17 1/3 IP). He was a September call-up to the big leagues. In his debut, he relieved Matt Garza with a 5-0 deficit in the 5th and two aboard. He promptly threw balls with his first six pitches and walked Colin Curtis and Francisco Cervelli to force in a run, before fanning Derek Jeter. In the 6th, he walked Curtis Granderson on four pitches, giving him three walks to four batters in The Show, before fellow rookie Jeremy Hellickson relieved him. However, he was better in his other appearances, ending up with a 1.80 ERA in 8 games.

McGee took over as the Rays' closer midway through the 2014 season, after Grant Balfour struggled in the role. He did very well, racking up 19 saves, to go along with his familiar 5-2 record and a 1.89 ERA in 73 games. He continued to overpower batters, as he struck out 90 in 71 1/3 innings, while walking only 16 and giving up a mere 48 hits. However, he had to miss the start of the 2015 season after undergoing elbow surgery in December, being only activated on May 14th. In his absence, Brad Boxberger took over as the closer and did well, relegating McGee to mainly set-up duties. He had a second stint on the DL from mid-August to late September with a torn meniscus in his left knee. In 39 games, he went 1-2, 2.41 with 6 saves, striking out 48 in 37 1/3 innings.

On January 28, 2016, McGee was traded to the Colorado Rockies along with German Marquez in return for OF Corey Dickerson and 3B Kevin Padlo, giving him a chance to be used as a closer again. He did save 15 games that season, going 2-3, 4.73 in 57 games, but then settled into a set-up role after the Rockies signed Greg Holland in 2017. Holland recorded 41 saves, while Jake had 3, but also 20 holds in 62 games. He pitched 57 1/3 innings and struck out 58 batters and went 0-2, 3.61 as the Rockies played in the Wild Card Game; he retired the only batter he faced in Colorado's 11-8 loss to the Arizona Diamondbacks in the game on October 4th. After the season, he was one of three major signings by the Rockies to shore up their bullpen, upping for another three years at $26 million, with Bryan Shaw getting a similar contract, and Wade Davis being paid double that to be the next closer in place of Holland. But paying a lot of money does not necessarily a good bullpen make, as both he and Shaw floundered, and Davis was not really lock-down either. His ERA jumped to 6.49 in 61 games, he had just 1 save, and was not used much in critical situations after the first few weeks of the year. In spite of these bullpen issues, the Rockies made it back to the postseason, this time winning the Wild Card Games before being swept in three games by the Milwaukee Brewers in the Division Series. Given his struggles in the season, he was not used in the playoffs. In 2019, he had another sub-par year, even though his ERA went down to a more palatable 4.35. He only pitched 41 1/3 innings in 45 games, and his only two decisions were losses. On July 18, 2020, with the season finally about to start after the interruption caused by the coronavirus pandemic, he was released alongside Shaw as the Rox decided to swallow the remaining final expensive year on the two relievers' contract. On July 21st, he was signed by the Los Angeles Dodgers, on the off-chance that he could right himself and give a hand during a season when teams were expected to be constantly on the lookout for pitching help.