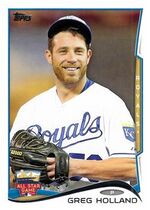 Greg Holland came to the big leagues in 2010.

He was drafted by the Kansas City Royals in the 10th round of the 2007 amateur draft. He was signed by scout Steve Connelly.

He began 2010 with the Omaha Royals, going 3-3 with three saves, a .199 opponent average and a 3.81 ERA in 36 relief appearances prior to his July promotion to the major leagues, replacing the traded Scott Podsednik on the MLB roster. He had a rough debut in The Show, needing 31 pitches to get through an inning. He relieved Bryan Bullington in the 8th with a 5-0 deficit against the A's. Rajai Davis grounded out on a full count, then Gabe Gross drew a full-count walk. The third straight full count went to Cliff Pennington, who singled, as did Coco Crisp to make it 6-0. Daric Barton walked on yet another full count. Kurt Suzuki then ground into a double play to end the inning. He went 0-1, 6.75 in 15 outings that first season. Holland took a big step forward in 2011, posting a 1.80 ERA in 46 games, covering 60 innings. He was 5-1 with 4 saves and struck out 74 batters. He was part of an excellent group of young relievers for the Royals that year that also included Aaron Crow, Tim Collins and Louis Coleman.

Holland became the Royals' closer late in the 2012 season, after veteran Jonathan Broxton was dealt to the Cincinnati Reds. He registered 16 saves to go along with a 7-4 record and a 2.96 ERA in 67 games that season; he also struck out 91 batters in only 67 innings. In 2013 he took another step forward, being named to the All-Star team for the first time. In July, he recorded 11 saves in as many opportunities with an 0.82 ERA to be named the major leagues, Delivery Man of the Month. He repeated as winner of the award in September, when he recorded 11 more saves to end the year with 47. That was not his only impressive number that season, as his 1.21 ERA in 67 innings, coupled with 103 strikeouts were also outstanding. Another rather incredible stat that season is from April 9th until his final appearance of the season on September 29th, he pitched exactly one inning in each of his outings, for a record of 65 consecutive one-inning appearances, the epitomy of the one-inning closer!

He had another great season in 2014, returning to the All-Star Game while going 1-3, 1.44 with 46 saves. He was named the initial winner of the Mariano Rivera Award, handed out to the best reliever in the American League. During the 2014 ALCS, Holland saved all four of Kansas City's wins in a four-game sweep of the Baltimore Orioles. He was the third pitcher to record four saves in a seven-game postseasons series, following Dennis Eckersley in the 1988 ALCS and John Wetteland in the 1996 World Series. He added a save in 3 scoreless innings in the World Series against the San Francisco Giants, but the Royals fell one game short of the Championship. In 2015, he recorded a save in in his first four appearances of the year, but had to go on the disabled list on April 18st with a muscle strain in his chest. He came back in mid-May and resumed the closer role, logging 29 saves by the end of August as the Royals had the best record in the American League, but he was not as sharp as in previous years. He then had health issues in September, pitching only 4 2/3 innings as set-up man Wade Davis, who had filled in as closer when he was unavailable earlier in the year, took over again. He finished the year with 32 saves and a record of 3-2, 3.83. The Royals placed him on the disabled list as the postseason started, and he was not reactivated as the Royals went on to win their first World Series since 1985. He underwent Tommy John surgery as the Royals were clinching the championship, and on December 2nd, knowing that he was about to miss all of 2016, they declined to offer him a contract, making him a free agent.

Holland did miss the entire 2016 season. On January 25, 2017, he signed a one-year contract with the Colorado Rockies worth $7 million dollars, with the possibility of earning significant performance bonuses. He returned to the mound at the start of the season seemingly his old self, as he immediately notched a save in Colorado's first two games of the year and registered seven in his first seven outings as the Rockies posted the best record in the National League after two weeks of play. He recorded his 16th save on May 14th, keeping up his torrid pace and representing one of the main reasons the Rockies were still holding on to first place at that point. He was the first major leaguer to 20 saves that season, reaching the mark on June 1st. His streak was in danger of ending on June 9th, when he walked the bases loaded against the Chicago Cubs, but he managed to escape the jam of his own creation by forcing Ben Zobrist to hit a shallow fly ball and striking out Jason Heyward, allowing him to preserve his team's 5-3 win for his 23rd straight successful save opportunity. He finished the season with a league-leading 41 saves in 45 opportunities, to go along with a record of 3-6, 3.61. The Rockies made it to the postseason as the second wild card team in the NL, and he got to pitch against the Arizona Diamondbacks in the Wild Card Game on October 4th. Unfortunately, things did not go well for him as he entered the game with one out in the bottom of the 8th inning in relief of Carlos Estevez, with Colorado trailing 8-7 and a runner on first base. After getting J.D. Martinez to hit into a force out, he fell apart, allowing a single, a wild pitch, a two-run triple by A.J. Pollock, then after an intentional walk, a bunt single by Jeff Mathis that made the score 11-8 before he got Brandon Drury to ground out to finally end the inning. Colorado's chances of tying the game had essentially been wiped out.

Holland became a free agent after the season, and in spite of his excellent performance in 2017, he found no takers until the 2018 season had already got underway. It was on March 31st that he signed with the St. Louis Cardinals on a one-year deal worth $14 million. The Cards sent him to the Palm Beach Cardinals to get a couple of minor league outings under his belt before joining the team as the closer. His debut for the Cards on April 9th was a forgettable one, however, as he came in to start the top of the 10th after his teammates had just tied the score at 4-4 against the Milwaukee Brewers. He proceeded to walk four batters (one intentionally) to force in the winning run before giving way to Bud Norris; he was charged with the loss. It was the beginning of an unhappy stay with the Cards as he went 0-2, 7.92 in 32 games, with no saves. He was released on August 1st, then signed with the Washington Nationals on August 7th. Things went a lot better with the Nats, as he was 2-0, 0.84 with 3 saves in 24 games. After the season, he signed a contract with the Arizona Diamondbacks.

He had a good spring training with the Diamondbacks in 2019, which allowed him to claim the closer's job at the start of the season, beating out Archie Bradley and Yoshihisa Hirano.