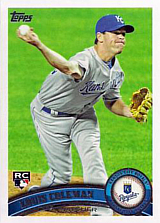 Coleman played baseball, football (as an All-Conference quarterback), basketball, soccer and track in high school. He hit .440 as a senior and was 10-1 with a 0.51 ERA and 109 strikeouts in 68 innings. He was picked by the Atlanta Braves in the 28th round of the 2005 amateur draft but did not sign and went to college.

As a sophomore at Louisiana State University in 2007, Louis was 2-3 with 4 saves and a 5.59 ERA, fanning 49 in 46 2/3 innings. He made huge strides as a junior, going 8-1 with 2 saves, a 1.95 ERA and 62 strikeouts in 55 1/3 innings while walking only 10. He was second in the elite Southeastern Conference in ERA behind Scott Bittle. He was 1-1 in the 2008 College World Series with 10 strikeouts in 7 innings, beating Rice. His only loss of the year was in LSU's final game, as they fell to the North Carolina in the Series. With a 3-3 tie in the 9th, he was ordered to intentionally walk Dustin Ackley and Tim Fedroff to load the bases. Given those poor circumstances, he was unable to put away the Tar Heels as Tim Federowicz hit a grand slam. Despite that excellent season, he fell to the 14th round of the 2008 amateur draft before the Washington Nationals selected him. Coleman decided to go back for his senior season.

Louis went 14-2 with a 2.93 ERA as a senior, with 142 whiffs in 129 innings and only 23 walks, earning SEC Pitcher of the Year honors. He tied A.J. Morris for second in NCAA Division I in wins, behind only Mike Leake, and was 4th in strikeouts behind only Stephen Strasburg, Leake and teammate Anthony Ranaudo. Louis led the SEC in both wins and ERA and was second to Ranaudo in whiffs; he also hit .440. In the 2009 College World Series, the right-hander was 1-0 with a 4.20 ERA and 18 strikeouts in 15 innings, beating Arkansas. In Game 3 of the finals, he tossed two shutout innings against the Texas Longhorns and whiffed four to lock up LSU's title. He was picked as a consensus All-American alongside Strasburg, Leake and Morris. Overall, Coleman won 29 games at LSU, 8th-most in school history and fanned 303, 9th-most. The Kansas City Royals picked him in the fifth round of the 2009 amateur draft. He was signed by scout Scott Nichols for a $100,000 bonus.

In his MLB debut on April 21, 2011, Louis relieved Sean O'Sullivan with a 2-0 deficit in the 7th against the Cleveland Indians and a man aboard. He promptly retired Adam Everett (on a strikeout), Grady Sizemore and Asdrubal Cabrera to end the inning. In the 8th, he retired Shin-soo Choo, but Carlos Santana doubled and Travis Hafner singled. Thankfully, Santana was thrown out at home on Hafner's single. Michael Brantley was intentionally walked, then Matt LaPorta flew out to end the 8th. After Kansas City scored one in the bottom of the 8th, Aaron Crow relieved Coleman to open the 9th. He stayed with the Royals for the remainder of the season and pitched quite well, putting up a 2.87 ERA in 48 games. He was 1-4 with 1 save, striking out 64 in 59 2/3 innings, giving Kansas City an excellent trio of rookie relievers with Crow and Tim Collins. Coleman had fine numbers in 2012, with a 3.71 ERA in 42 games, and 2013, going 3-0 with an 0.71 ERA in 27 games. After falling to a 5.56 ERA in 2014, he was waived off the 40-man roster prior to 2015, making just 4 appearances as a September call-up. He saw his most work with the Los Angeles Dodgers in 2016, pitching 61 games with a 2-1 record and 4.69 ERA in 48 innings as a situational righty. After splitting 2017 in the minor league chains of the Cincinnati Reds and Arizona Diamondbacks, he was last spotted dealing with the Detroit Tigers in 2018, going 4-1 with a 3.51 ERA in 51 games.

Coleman had a very particular pitching motion, which had him stand with his back halfway turned towards the batter and his right foot ahead of his left foot while pitching out of the stretch. He then whipped the ball across his body, hiding it behind his back until the last possible moment. This made it very hard for the batter to pick up the ball, particularly right-handed batters.