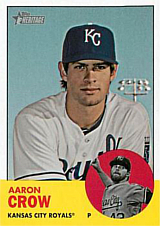 Aaron Crow pitched four seasons in the big leagues with the Kansas City Royals. He was an All-Star as a rookie in 2011.

Crow was 1-4 with a 4.06 ERA as a freshman at Missouri and allowed 94 hits in 77 2/3 innings for a .301 batting average. In his sophomore season, Aaron was 9-4 with a 3.59 ERA, finishing third on his team in ERA. He emerged as a top prospect in the 2007 Cape Cod League, going 3-1 with a 0.69 ERA for the Falmouth Commodores. He allowed only 19 hits and 9 walks in 40 1/3 innings while striking out 36. It tied Tim Lincecum for the 10th-lowest ERA in league history. He was named to the All-Star team and Baseball America rated him the top prospect in the circuit. As a junior, Crow was 13-0 and led D-I in wins while fanning 127. At one point, he threw 43 consecutive scoreless innings. He was named to the All-Big 12 team for his work. The Washington Nationals ate the Crow 9th overall in the draft, surpassing Max Scherzer as the highest Missouri Tiger draft pick. He was the second hurler taken, following Brian Matusz.

The Nationals offered Aaron $3.5 million to come aboard while Crow's camp countered seeking $4 million. When he was unable to come to terms with the Nationals, Crow signed with the independent Fort Worth Cats to wait until being drafted again in 2009. For the Cats, he pitched one inning, giving up one hit and no runs. He was 3-0 with a 1.06 ERA for Fort Worth in 2009. Crow was next picked by the Kansas City Royals 12th overall in the 2009 amateur draft, a drop of 3 spots from 2008; some projections had him going as high as fourth before his stock fell. He was signed by scout Scott Melvin to a $3 million dollar big league contract that included a $1.5 million signing bonus.

Aaron made his major league debut on Opening Day March 31, 2011, in relief of Luke Hochevar. He made the team with an outstanding spring, during which he gave up only 3 runs in 13 1/3 innings. In his debut against the Los Angeles Angels, he came in with a man on and two outs in the 6th inning and struck out Howie Kendrick, to get out of the inning. He followed with a perfect 7th inning, striking out two more batters, in a very impressive outing. He was followed on the mound by two other relievers making their debut that day, Nathan Adcock and Tim Collins, although the Royals lost, 4-2. Crow was the Royals' sole representative at the 2011 All-Star Game. He finished the year with a record of 4-4, 2.76, in 57 games, having given up 55 hits and 31 walks in 62 innings while striking out 65 batters. He was exclusively used as a set-up man for closer Joakim Soria.

In 2012, the Royals headed into spring training with plans to make Crow a starter. When Soria was diagnosed with an elbow injury in March, they turned around and announced Aaron would remain in the bullpen, now competing with Jonathan Broxton and Greg Holland for the closer's job. Holland won the competition and, in time, became one of the best closers in the majors. Aaron had a solid year as a non-closer, making 73 appearances with a record of 3-1, 3.48 and a couple of saves. In 2013, he went 7-5, 3.38 in 57 games, but pitched only 48 innings, as the Royals' bullpen became crowded with the development of Holland, the arrival of Wade Davis and solid contributions by others such as Tim Collins, Kelvin Herrera and Luke Hochevar. That bullpen was one of the reasons the Royals had one of their best seasons in years and why they finally made it over the hump in 2014, going all the way to the World Series. It was bittersweet for Aaron, as his role became even more marginal. He did make 67 appearances, with a record of 6-1 and 3 saves, but his ERA rose to 4.12, and he did not pitch at all in the postseason, being displaced by hotshot rookie Brandon Finnegan.

On November 28th, the Royals traded their once top prospect to the Miami Marlins for Brian Flynn and Reid Redmond, giving Aaron a chance to start over in a new organization. He never made it back. He spent 2015 in the Fish system, moving to the Chicago Cubs for more minor league tossing in 2016. He was last seen tossing in the Mexican League in 2018.