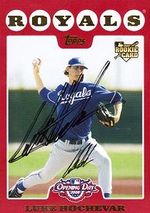 Pitcher Luke Hochevar was picked three times in the draft before signing but debuted in the majors just a year after he inked his first deal with a team in Organized Baseball.

Out of high school, Hochevar was taken in the 39th round of the 2002 amateur draft by the Los Angeles Dodgers. He was asking for $700,000, or else would have been chosen earlier, and went off to college. He was 6-5 with a 4.64 ERA in an unimpressive freshman year. As a sophomore, he improved to 4-2, 2.86. He joined Team USA's college division and went 1-0 with a save and a 2.73 ERA, striking out 38 in 33 innings but walking a team-high 11. He went 1-0 with a 3.46 ERA in the 2004 World University Championship, posting the highest ERA on the Gold Medal team while tying Ricky Romero for the team lead in innings pitched. He got the call for the US in the finale and beat Yasuhiro Ichiba and Japan, 4-2.

Hochevar was a consensus All-American in 2005, going 15-3 with a 2.26 ERA. In 140 innings, he allowed 104 hits and struck out 154. He tied Lance Broadway for the NCAA Division I lead in wins, tied Mike Pelfrey for second in innings pitched and was second to Ian Kennedy in strikeouts, four back, and 3 ahead of #3 Broadway. Tennessee made it to the 2005 College World Series but was quickly eliminated. He won the Roger Clemens Award.

He was selected by the Los Angeles Dodgers in the 2005 amateur draft, falling to 40th overall after having been slated to go higher; salary demands were a concern as he was being advised by Scott Boras. The Colorado Rockies had wanted to take him 7th but he did not agree to their $2.3 million bonus offer.

On September 2, Hochevar joined teammate Eli Iorg at Iorg's mother's birthday party. Luke agreed to appoint Iorg's agent Matt Sosnick as his adviser. Sosnick arranged a $2.98 million deal with Dodgers scouting director Logan White. Hochevar verbally agreed, but changed his mind after speaking to Boras. Even though it would have made him one of the 5 highest-paid players from the draft, he said it was "a very bad contract". On September 14, Los Angeles withdrew its offer. Luke considered returning to Tennessee but then signed on with Boras as an agent, becoming a pro.

He played with the Fort Worth Cats of the independent American Association in 2006, alongside another player to be drafted multiple times amidst salary disputes, Matt Harrington. He was 1-1 with a 2.38 ERA for Fort Worth.

He was then chosen by the Kansas City Royals with the first overall pick in the 2006 amateur draft. Hochevar signed with scouts Phil Huffman and Gerald Turner for a $3.5 million bonus and a guaranteed $5.3 million. It was a major league deal, the 4th #1 pick overall in the past 20 years to make such an arrangement (following Alex Rodriguez, Pat Burrell and Delmon Young).

After signing with the team, Hochevar made four starts for the Burlington Bees of the Midwest League, posting a 1.17 ERA. He spent the fall with the Grand Canyon Rafters, posting a horrid 8.64 ERA in three starts.

He was called up to the Major Leagues on September 3, 2007 by the Kansas City Royals. He debuted five days later, relieving Ryan Braun while Kansas City trailed the New York Yankees, 11-2. He allowed a single to his first batter, Robinson Cano, but went on to toss 3 scoreless frames to close out a 11-3 loss. he made only 4 appearances that season, going 0-1 with a 2.13 ERA. In 2008, however, he started 22 games, but results were far from great, as ended the year at 6-12, 5.51. Unfortunately, he failed to improve much over the next few years, as the Royals were mired in the depths of the American League standings. In 2009, his record was 7-13 with an awful 6.55 ERA in 25 starts. That was in spite of doing well with AAA Omaha, where he was 5-1, 1.50 in 8 starts and looked like the pitcher who had been the overall number one pick in the draft three years earlier.

Hochevar showed a bit of improvement in 2010, as he lowered his ERA to a still high 4.81 and went 6-6 in 18 games, losing time to an injury. 2011 was his first full season in the majors as he made 31 starts and pitched 198 innings, at least giving the Royals some durability. He had a record of 11-11, not bad pitching for a team that finished 20 games below .500 and his 4.68 was the lowest of his career thus far. It looked that this was something on which he could build future success, but he regressed in 2012 as his ERA shot back up to 5.73 in 32 starts. He led the AL with 118 earned runs allowed and finished with a a record of 8-16.

At this point the Royals decided that for all his talent, Hochevar was not cut out to succeed as a starter. They decided to move him to the bullpen, which was not necessarily an easy decision, given that they needed starting pitchers but already had a number of solid young relievers. However, Luke made the move pay off in droves as he had a brilliant season in 2013, coinciding with the Royals finishing 10 games above .500 and hanging on to the fringes of the postseason race until September. He made 58 appearances, all of them out of the bullpen, and pitched 70 1/3 innings, striking out 82 against only 17 walks. His ERA was a sparkling 1.92, and he had a record of 5-2 with 2 saves. He was not able to build on that first taste of success immediately, however, as 2014 ended before it began; he felt a twinge in his elbow in a spring training appearance on March 3rd. The injury turned out to be serious enough to require Tommy John surgery, wiping out his season and costing Luke a chance to be part of the Royals' run to the 2014 World Series. On December 3, 2014, however, he re-signed with the Royals on a two-year deal worth $10 million.

He made his return to the major leagues with the Royals on May 7, 2015, with a scoreless inning of work against the Cleveland Indians. The Royals were being careful with him, only using him for 7 innings over 9 appearances in his first month back with the team. e went 1-1, 3.73, with 1 save in 49 appearances that season, when the Royals won the first World Series title in three decades. He pitched 9 times in the postseason, logging 10 2/3 innings, without giving up a run. He was credited in a win in the ALCS against the Toronto Blue Jays and again in Game 5 of the World Series on November 1st, which clinched a four games to one defeat of the New York Mets. He pitched a scoreless 10th and 11th innings to benefit from the Royals' five-run outburst in the top of the 12th. Wade Davis then closed out the 7-2 win. He returned to pitch 40 times in 2016 and went 2-3, 3.86 but his season ended in August when he had to undergo surgery for thoracic outlet syndrome, which caused pain in his neck and shoulder area. He tried to work his way back to the majors again, but found out he was unable to throw without pain, and in August of 2018 officially announced his retirement from the game.