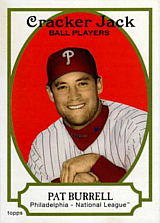 Patrick Brian Burrell
(Pat The Bat or The Machine)

Pat Burrell hit over 250 home runs in a major league career mostly spent with the Philadelphia Phillies, seeing fleeting action with the Tampa Bay Rays and San Francisco Giants. He was one of only a handful of players to hit 250 or more home runs and never make a major league All-Star team.

Burrell was a strong power hitter who set many records at The U. He won the Golden Spikes Award in 1998 as the top college baseball player in the United States and still ranks among the all-time NCAA top ten in batting average (.442) and slugging percentage (.888). He was named the most outstanding player in the 1996 College World Series. In the 1997 Intercontinental Cup, Pat hit .231/.535/.625 with an amazing 15 walks in 9 games. He hit 3 home runs and scored 8 times, tying for 5th in the event in homers. He was 1 for 4 with two walks in the Bronze Medal game loss to Australia. Paul Gonzalez beat him out for All-Tournament honors at third base.

Pat was selected by the Phillies with the first overall pick in the 1998 amateur draft. He reached the big leagues within two years and soon had a fan following at Veterans Stadium called Burrell's Bunch. When Burrell was on, he could hit mammoth home runs, but often had trouble with the outside breaking ball and ended up flailing at bad pitches, which is why he struck out so often. In 2002, he beame the 12th Phillies player to hit 30 home runs and collect 100 RBI, mashing 37 taters and driving in 116 men while batting .282/.376/.544. He became the last player to get a hit at the Vet the following season, when he singled off Jason Marquis of the Atlanta Braves with 2 outs in the bottom of the ninth on September 28. From 2005 to 2008, Pat The Bat was a crucial component of the Phillie lineup, slugging over .500 each season while belting more than 30 bombs three times and drawing more than 100 walks twice. He chipped in to the Phils second World Series title in history in 2008; smacking 33 doubles and 33 homers, driving in 86 runs while walking 102 times. He hit two home runs in the NLDS and one in the NLCS, but in the World Series, he only went 1 for 14 (.071) with his only hit a double.

He became a free agent after the season and fell victim to the market correction caused in part by the economic crisis that befell the United States. With his services little in demand, he ended up signing a two-year contract worth $16 million with the Tampa Bay Rays, the Phils' opponents in the World Series. Installed as the full-time DH in 2009, he had a disappointing season, hitting only .221 in 122 games with 14 homers and 64 RBI. In 2010, he began the season platooning with Willy Aybar but was released on May 15 after hitting only .202 with 2 homers in 24 games. He played a few games with the Fresno Grizzlies and then was called up to the San Francisco Giants. He found his hitting stroke again by the bay, hitting .266/.364/.509 in 96 games with 16 doubles and 18 homers as the Giants won their first World Series since their move to San Francisco. Burrell had a few hits in the first two rounds of the postseason, but in the Series, Texas Rangers pitchers held him hitless with 11 strikeouts in 13 at-bats. He returned to the Giants in 2011 but fell to .230 with 7 homers in 92 games and only 183 at bats - the lowest total of his career. That season, he was revealed by Barstool Sports to be the bizarre gimp character "The Machine" who had appeared in a speedo and mask during a series of interviews with Brian Wilson in the glow of the Giants World Series win.

On January 30, 2012, Burrell announced his retirement from baseball, citing a chronic foot injury. He ended his career with a .253/.361/.472 slash line, 292 home runs, 976 RBI and 932 walks. He particularly delighted in torturing the New York Mets, with his 42 home runs against the Metsies sixth-best all-time. The Phillies signed him to a one day contract and brought him back to Philadelphia on May 19th to allow him to retire as a Phillie, honoring him before their game against the Boston Red Sox at Citizens Bank Park. In 2015, he was an inductee onto the Philadelphia Baseball Wall of Fame.

After retiring, Burrell stayed with the Giants as a special assignment scout & assistant to the general manager from early 2012 to mid-2015. He finally stepped aside after getting tired of the traveling. In 2019 Burrell joined NBC Sports Bay Area as a pre- and post-game analyst for Giants games.

Burrell was scheduled to be hitting coach of the San Jose Giants in 2020 before the season was cancelled due to Covid-19.