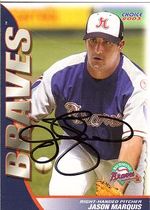 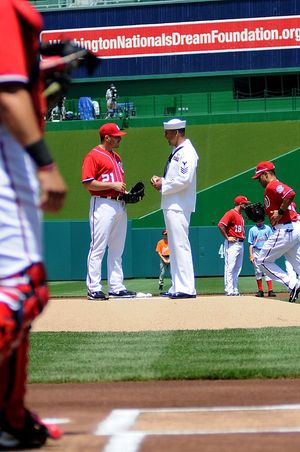 Marquis on the mound speaking to a Navy sailor in 2011.

In 2008, Marquis drove in 5 runs in a 9-5 win over the Mets on September 22nd. He was the first Chicago Cubs hurler since Milt Pappas in 1972 to drive in 5 in a game and the first Cub moundsman to hit a grand slam since Kevin Tapani in 1998. Jason's slam came off Jon Niese.

On August 14, 2011, shortly after being acquired by the Arizona Diamondbacks from the Washington Nationals at the trading deadline, Marquis was hit on the shin by a batted ball hit by Angel Pagan in the 3rd inning of a game against the New York Mets. Thinking it was only a bad bruise, Marquis continued pitching into the 4th inning, when he collapsed in pain while pitching to Josh Thole. The pitch hit Thole, and Marquis was removed from the game and later diagnosed with a fractured fibula, ending his season.

Marquis started the 2012 season with the Minnesota Twins after signing with the team as a free agent over the winter. He made 7 starts, going 2-4, 8.47, and was released on May 28th. He then moved to the San Diego Padres, where he pitched a lot better the rest of the way, with a record of 6-7, 4.04 and a shutout in 15 starts. He then began the 2013 season pitching very well, as he earned his 8th win, matching his previous two years' total for wins on June 10th when he beat the Atlanta Braves, 7-6, to improve to 8-2, 3.59 after 13 starts. He was at 9-5, 4.05 when he suffered a complete tear of his ulnar collateral ligament in his 20th start of the year on July 19th in a game against the Cardinals. He was immediately placed on the disabled list and underwent Tommy John surgery shortly thereafter.

Marquis did not play in the majors in 2014, but pitched a few games in the Philadelphia Phillies organization while rehabbing from the surgery. In January of 2015, he signed a minor league deal with the Cincinnati Reds. He went 3-4, 6.46 in 9 starts for the Reds before being released on June 10th, ending his professional career.

He was back in uniform with the Israeli national team for the 2017 World Baseball Classic Qualifiers. Starting their opener, he allowed one run in three against the Great Britain national team before Josh Zeid took over with a 1-1 tie; Israel won, 5-2. He got the nod in the finale, also against Britain, with a spot in the 2017 World Baseball Classic at stake. He threw four perfect innings before Zeid relieved with a scoreless game in progress; Israel won, 9-1 to make their first World Baseball Classic. Marquis led the qualifiers with two starts and his .43 WHIP tied Peter Moylan for 6th. Only Dylan Unsworth (8) worked more innings in the qualifiers and Marquis had the best ERA of any hurler who allowed an earned run in the qualifiers.

Marquis has been a huge supporter of Little League Baseball in his home area of Long Island, NY, whose teams have done very well in the Eastern region, reaching the Little League World Series on a number of occasions. He has donated a large amount of time and money to the cause.