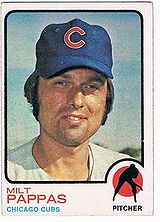 A Detroit boy, born and raised, Milt Pappas entered the majors as a much heralded rookie. Armed with a blazing fastball serving as his main calling card, he became the first hurler to compile 200 wins without a single 20-win season, while managing to post double-digit wins for 16 straight seasons. Pappas is one of only 16 live-ball era pitchers to win 150 games before turning 30. Like 15 of them, he fell short of 300 wins (only Greg Maddux made it).

Milt Pappas is remembered for being involved in a very lopsided trade, on December 9, 1965 when he was dealt by the Baltimore Orioles to the Cincinnati Reds, alongside pitcher Jack Baldschun and outfielder Dick Simpson, for future Hall of Famer Frank Robinson. Robinson won the Triple Crown for the Orioles in 1966 as well as the AL MVP Award, and led the Birds to a World Series sweep over the Los Angeles Dodgers; the Robinson-led Orioles would return to the World Series three more times from 1969 to 1971.

Pappas, who was a star in his own right, having just started the 1965 All-Star Game for the American League, could not possibly match Robinson's elite standards, but was still a decent pitcher in the National League, as his 99 wins over 8 seasons attest. Despite Pappas' rightful star status, his career legacy is overshadowed when compared to Robinson's superstar accomplishments.

It should be noted that he came one batter short of throwing a perfect game for the Chicago Cubs on September 2, 1972. He had 2 balls and 2 strikes on hitter #27, Larry Stahl of the San Diego Padres, and his last two pitches were ruled balls. He settled for the no-hitter, but he never forgave the umpire. In his frequent tirades against the umpire (Bruce Froemming) he usually tacitly implied that the pitch was in fact outside the strike zone. He argued that the last pitch in Don Larsen's perfect game was a foot outside the strike zone but the ump gave Larsen the call, so this guy should've done it as well. His own catcher, Randy Hundley, also made statements indicating that the pitch was outside. Pappas screamed at the ump after the walk that he blew his chance to make history for himself. The reporters after the game asked Froemming if he realized he blew his chance to be remembered. "What are the names of the other umpires who called perfect games?" he replied. After a silent response Froemming finished with: "That's how famous I'd be." Ironically, he's better known for that call than any of the perfect game umps. Pappas set another mark in 1972 when he finished the season with 11 straight winning starts, including the no-hitter. No Cubs pitcher has topped that since; Jake Arrieta came closest with 8 straight winning starts in 2015.

Tough a typically bad hitter like most pitchers, Pappas somehow managed to slug 20 home runs over the course of his long career. He is credited with a game played at second base on September 11, 1958 against the Kansas City Athletics (Boxscore), but this was in fact a ploy by Orioles manager Paul Richards to avoid batting a couple of weak hitters, Jim Busby and Billy Gardner, in the 1st inning. Fellow pitcher Jack Harshman, hitting fifth, gave way to pinch hitter Gene Woodling when his time to bat came up, and Pappas was replaced by Gardner when the Orioles took the field in the bottom of the 1st, the top of the inning having ended before he had to bat. Under today's rules, Pappas would not be credited with a game played in the field if such a strategy were used. On April 18, 1962, he homered off Bill Stafford of the New York Yankees for what turned out to be the only run in a 1-0 win. He was the last American League pitcher to hit a homer to win a 1-0 game until Nathan Karns did it for the Tampa Bay Rays in an interleague game on July 21, 2015. In spite of hitting those 20 homers in his career, he batted only .123.

Pappas' wife Carole disappeared suddenly in 1982, nine years after he retired from baseball, and was found five years later in a body of water. She'd been out for a drive. There was no evidence of foul play. Pappas later remarried and his wife Judi survived him.