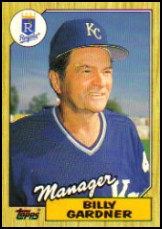 Infielder Billy Gardner debuted in the minors in 1945. He missed the 1946 season due to military service. He later spent a decade in the majors.

After his playing career ended, Gardner was a Boston Red Sox coach in 1965 and 1966. He was a member of the Montreal Expos staff in 1977 and 1978, then managed in their system for a couple of seasons. In 1981, he joined the Minnesota Twins as a coach before replacing Johnny Goryl as manager in mid-season. He remained with the club through 1985, with his best season being a third place .500 finish in 1984. During his stay with the Twins, he was widely credited for helping the development of the group of young players that would form the core of the World Series-winning team of 1987 - players such as Kent Hrbek, Gary Gaetti and Tom Brunansky, who were all rookies in 1982.

In 1987, he became manager of the Kansas City Royals when Dick Howser was unable to manage due to a brain tumor; he took over for Mike Ferraro, who had filled in on an interim basis while Howser was undergoing treatment in 1986. However, before the season was done, Gardner was replaced by John Wathan.