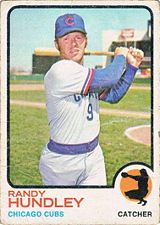 An "iron man' behind the plate, Randy "Rebel" Hundley caught 160 games for the Chicago Cubs in 1968 and caught 149 or more every season from 1966 to 1969. Hundley started his career with the San Francisco Giants before joining the Cubs in 1966. He also played for the Minnesota Twins, in 1974 and the San Diego Padres in 1975. Originally a fair hitter, knee injures slowed him from 1970 on and he finished with just a .236 average following his retirement after the 1977 season.

Rebel hit for the cycle on August 11, 1966 as the Cubs battled the Houston Astros.

Hundley managed the GCL Cubs (1978), Midland Cubs (1979-1980) and Iowa Oaks (1981). He introduced the hinged catcher's glove to the major leagues. This had already been used in the Negro Leagues and in Japan, but not in the major leagues. There is speculation he may have been introduced to the model by Japanese import Masanori Murakami, who was a teammate with the Giants. His longevity demonstrated the superiority of this model, and it was soon widely adopted. Originally, he used a custom-designed mitt, but he soon signed a deal with Sears Roebuck to have it manufactured on a large scale; as its "inventor", he made a considerable amount in royalties as the model became the standard for catchers all over baseball.

He is the father of Todd Hundley. His first baseball card appearance was in the 1966 Topps set.