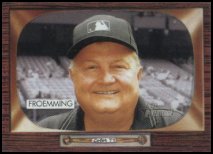 Bruce Froemming was a major league umpire from 1971 to 2007. With 37 big league seasons under his belt when he retired, he was tied with Bill Klem in service as an umpire, and his 5,163 games were second only to Klem, who had 5,370. Both marks were passed by Joe West, who worked his 38th season in 2015. West also exceeded his career total and later overtook Klem as well, in 2021.

Froemming holds three major league records. He has umpired the most no hitters (11), League Championship Series (10), and postseason games (111 - since tied by Jerry Crawford, who retired with the same total in 2010).

In 2003, Froemming was suspended for 10 games due to using an anti-Semitic slur in regards to an umpiring administrator.

On August 16, 2006, Froemming worked his 5,000th regular season game, becoming only the second umpire (after Klem) to reach that figure.

In June 2007, it was announced that Froemming would work home plate at the 2007 All-Star Game in San Francisco. At that time, Froemming also announced his retirement at the end of the season, his 48th in pro ball. After his retirement, he became an umpiring supervisor for Major League Baseball and minor league umpiring instructor.