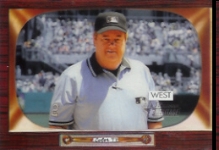 Joe West is an umpire who began his career in the National League in 1976 and who in 2021 became the holder of the record for most games umpired. After a star career as a college quarterback, West made his major league umpiring debut on September 13, 1976 after just three minor league seasons. In 1981, he became the youngest umpire to work a League Championship Series. It was the first of many postseason appearances for West.

In the 1990s, West created somewhat of a firestorm after he ejected Von Hayes from a game after Hayes criticized the home plate umpire to the first base coach. He has a reputation for having a fiery temper and has been criticized many times for showing up players and managers and for escalating budding confrontations. His critics allege that he likes too much to be the center of attention.

West lost his job in 1999 in the ill-advised resignation of many umpires. He returned to the field in 2002, with back pay for the missed seasons, after a settlement was reached. He later became president of the World Umpires Association, which was formed as a result of that fiasco.

West's career came full circle when he worked the plate for the first game of the 2005 World Series. The twenty-eight-year veteran was also named crew chief for the Series. He had previously worked the 1992 and 1997 Fall Classics, and returned again in 2009 and 2012.

On September 14, 2014 he ejected Philadelphia Phillies reliever Jonathan Papelbon from a game after Papelbon had made an inappropriate gesture towards the crowd that was booing him. Papelbon was suspended for seven games, but West also received a one-game suspension from the Commissioner's office, as he had inflamed a tense situation by grabbing the pitcher's jersey. Papelbon had stated that the two had had a history of run-ins and that the umpire had allowed his personal feelings get in the way of his professional judgment, an allegation which the Commissioner's sentence confirmed to an extent.

On June 20, 2017, he umpired his 5,000th major league game, becoming the third umpire in history to reach the milestone, after Bill Klem and Bruce Froemming. He had worked more seasons than any other umpire - 40 - and was also second all-time in postseason games (123), behind only Gerry Davis. Shortly after that game, on June 30th, he was involved in a strange incident when, umpiring a game at first base in Miller Park, he was hit in the back of the neck by a baseball thrown from the stands. He was not seriously hurt. He was named to work home plate at the 2017 All-Star Game, no doubt in recognition of the historic milestone he had just passed. During the game, he was involved in a funny incident as Nelson Cruz stepped up to home plate in the middle of the game with a smart phone in his back pocket and proceeded to have C Yadier Molina snap a picture of him with the veteran umpire. West cracked a rare in-game smile on that occasion. A month later, however, he was handed a three-game suspension for making public remarks about Adrian Beltre: he had been asked who was the biggest complainer in the majors, and he said: "It's got to be Adrian Beltre. Every pitch you call that's a strike, he says, 'Whoa! Whoa! Whoa!' [...] I told him, ‘You may be a great ballplayer, but you’re the worst umpire in the league. You stink.’" While this was clearly meant in jest, MLB was not amused, as it gave the "appearance of a lack of impartiality." The Umpires Association protested that this was clearly an over-reaction, as the words were just part of the normal banter that goes on during games, but West accepted the suspension without raising a huge fuss.

In October 2019, he announced that he was suing former player Paul Lo Duca over remarks the latter had made in a podcast a few months earlier. In these, Lo Duca had stated that teammate Billy Wagner used to bribe West by letting him borrow his vintage car in exchange of a more favorable strike zone. West claimed that the incident was a complete fabrication. West also complained that Lo Duca had dramatically exaggerated in the same broadcast the number of times he had ejected him from a game, something again that made him look unprofessional. On April 12, 2021, the New York Supreme Court found in his favor and awarded him $500,000. In particular, the facts showed that West had never been the home plate umpire in a game when Wagner and Lo Duca formed the battery, so the story could only have been a fabrication.

Heading into the 2020 season, West's goal was to match Bill Klem's record of 5,375 games umpired, but the coronavirus pandemic changed his plans, as the season was shortened to 60 games, and he needed 65 more to reach Klem's record total. At 67, he was considered a high-risk employee by MLB and could have skipped the season without incurring any penalty - his colleague Gerry Davis, second in the seniority ranks, did just that - but instead he decided to go ahead, explaining that he felt the number of casualties associated with the disease were greatly exaggerated. "Those statistics aren't accurate, I don’t care who's counting them", he told reporters, claiming that just about any death occurring at the time was attributed to the virus. This was of course in complete contradiction with the Center for Disease Control's views that the number of 130,000 deaths circulating at the time was in fact likely an undercount, as many deaths caused by the virus had not been tabulated due to the lack of post-mortem testing in many cases. He also dismissed the idea that he faced higher risk: "I just don’t consider myself elderly."

He tied Bill Klem's record for most games umpired on May 24, 2021 and set a new one the next day, May 25th, when he umpired game #5,376. He was serving as the home plate umpire in a game between the St. Louis Cardinals and Chicago White Sox for the occasion; the game was stopped briefly after it became official in the 5th inning as Commissioner Rob Manfred congratulated him. In his honor, the Oak Ridge Boys, one of his favorite musical acts, had sung the National Anthem before the game. The San Diego Chicken, who also had a long-running history with West, also showed up for the game, presenting him with a bouquet of flowers (and this time actually giving him the flowers; he had left him holding only the stems in a famous earlier stunt). His 44 seasons as an active umpire were also a record; Klem had also long held that record, with 37, but Froemming tied him in his final season, and West passed both in 2015 when he started his 38th season. It was announced on September 26th, just before he was to work home plate for the nationally-televized Sunday Night game for what turned out to be the final time, that he would retire at the end of the season. This was officially confirmed the following February, when MLB announced its roster for the upcoming season and West's name was left off. He finished his career with a record 5.460 hames over his 44 seasons, and made his last appearance as the home plate umpire for the 2021 National League Wild Card Game at Dodger Stadium on October 6th.

He patented a type of chest protector that was later adopted by most MLB umpires. Additionally he writes country music and once sang at the Grand Ole Opry.