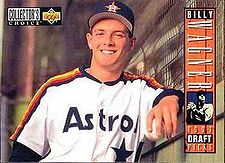 When he announced his retirement after the 2010 season, Billy Wagner ranked # 5 on the all-time list for saves although he had never led the league in any season in that category.

His Adjusted ERA+ of 187 is higher than any player on the formal list (which requires a minimum of 1,000 innings, a total Wagner never reached), except for his contemporary Mariano Rivera. As a comparison, Pedro Martinez has an Adjusted ERA+ of 154, while Rivera was at 204 at the end of 2010.

Wagner made his first major league appearance with the Houston Astros in 1995. He only pitched a third of an inning that first season, but by the end of 1996, he had staked his claim as the Astros' closer, after saving 9 games with a 2.44 ERA in 37 outings. This started a string of outstanding seasons, from 1997 to 2005, when he saved 20 or more games each year with an ERA no higher than 2.85. The only exception was 2000, when he was injured and limited to 19 ineffective games and went 2-4, 6.18. He came back strong in 2001, however, and even moving to the Philadelphia Phillies in a trade for Ezequiel Astacio, Taylor Buchholz and Brandon Duckworth following the 2003 season did not slow him down. His personal best was 44 saves in his last season in Houston and he made the All-Star team four times, three times as an Astro and once as a Philly during those 11 seasons. He was also a strikeout machine during those years, three times topping 100 strikeouts, including a high of 124 in 1999 - even though he never pitched more than 86 innings. The only black mark on his record was his lack of postseason success: he failed to record a save in four different visits to the NLDS, giving up 5 runs on 8 hits in 5 2/3 innings as the Astros made a first-round exit all four years. Wagner opened 2004 with 30 K and no walks, matching Dennis Eckersley's post-1900 record; Adam Wainwright passed the two closers in 2013.

Wagner signed as a free agent with the New York Mets on November 28, 2005. He put up a number of solid seasons as the Mets' closer, even if marked with the occasional high-profile blown save. In 2006, he saved two games in the NLDS against the Los Angeles Dodgers and got to pitch in the NLCS for the only time in his career. Things did not go as well for him in that round, though: he was charged with a loss and gave up 5 runs in 2 2/3 innings as the Mets bowed out to the St. Louis Cardinals in 7 games. Shortly after being named to the 2008 All-Star Game, he was placed on the disabled list with an elbow injury in August 2008 and in early September, he underwent Tommy John surgery and missed the remainder of the season; it was expected that he would be out for all of 2009 as well. The Mets went into a tailspin after Wagner's injury in 2008, led by their bullpen's inability to hold on to late-inning leads, and were passed by the Phillies in the NL East, and on the season's last day by the Milwaukee Brewers for the wild card.

With Wagner seemingly unavailable for 2009, the Mets went out and signed free agent closer Francisco Rodriguez and acquired former Seattle Mariners closer J.J. Putz in a trade to further bolster their bullpen. However, Wagner beat the odds by completing his rehabilitation from surgery in less than a year, going back on the mound for the Mets on August 20th, with a fastball still clocked at 96 mph. The Mets had fallen well out of contention by that point, though, because of injuries to a number of key offensive players such as Carlos Beltran, Carlos Delgado and Jose Reyes. They decided to deal Wagner to the Boston Red Sox less than a week later, obtaining OF Chris Carter and Eddie Loria in return; speculation was that the Mets were concerned that Wagner would chose to accept salary arbitration after the season, placing the team in a financial quandary.

Wagner pitched well for the Red Sox over the last weeks of 2009, putting up a 1.98 ERA in 15 games and striking out 22 batters in 13 2/3 innings. He pitched twice in the ALDS, but gave up 2 runs in 1 inning against the Los Angeles Angels. After the season, he opted for free agency, as he wanted to be a closer again, something that would not have been possible in Boston given the presence of Jonathan Papelbon. The Atlanta Braves took a chance on him, and were well rewarded, as he saved 37 games with a 1.43 ERA in 2010, stabilizing a young bullpen and leading the Braves back to the postseason. He made the All-Star team for the 6th and last time that year. He made what would turn out to be the last appearance of his career in the NLDS, giving up a hit in a third of an inning against the eventual World-Champion San Francisco Giants. After the season, he made the surprising announcement that he was retiring immediately, surprising because he had been as effective as ever in his last season.

While Wagner was clearly one of the better closers of the second half of the 1990s and of the 2000s, it was not clear that he would receive much support in voting for the Hall of Fame. He had one of the highest save totals of all-time, although the leaderboard for saves changed rapidly over the past two decades. His ERA+ was excellent, as noted above; however, his lack of success in the postseason, the relatively small number of innings he pitched, and the fact he was overshadowed by contemporaries Trevor Hoffman and Mariano Rivera during most of his career were factors that played against him. In his first year of eligibility in 2016, he received 10.5% of the vote, a low total that made his future election very unlikely. In 2017, he fell to 10.2% of the vote, then in 2018 inched up slightly, to 11.1%. He moved up more significantly in 2019, to 16.7%, as he was now the consensus "best reliever not in the Hall of Fame" following the elections of Hoffman, Lee Smith and Rivera. In 2020, he moved up to 31.7% and made another big move in 2021 when he received 46.4% of the vote in a year when no one was elected.