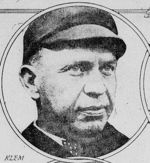 "To me, baseball is not a game, but a religion." - Bill Klem

Bill Klem, perhaps the most famous of umpires, was a colorful National League umpire from 1905 to 1941 and then was chief of league umpires. He was one of the first to use arm signals to indicate his calls. He was also the first ump to wear an inside chest protector.

Klem was nicknamed "The Old Arbitrator", which he liked, and was also called "Catfish", which he hated:

"All you had to do was call him Catfish and out of the game you'd go. Maybe it was because he had rather prominent lips . . . - Chief Meyers

He wanted to be a catcher in the Canadian League in 1896, but had arm problems. He played semi-pro ball for a few years and worked in construction.

He was introduced in 1904 to president Harry Pulliam of the National League by umpire Hank O'Day, later to be famous as the umpire faced with the Merkle Bonehead Play.

He was acknowledged as a great caller of the balls and the strikes, which was quite useful in his early umpiring days when he might often be the only umpire on the field.

He was an umpire in 18 different World Series, from 1908 to 1940. He also worked the first All-Star Game, and agreed to officiate at a race around the bases between Hans Lobert and a race horse in 1914.

His home was in Yonkers, NY but he wintered from 1925 on in Florida.

"The best umpired game is the game in which the fans cannot recall the umpires who worked it."

"Gentleman, he was out because I said he was out."

"Son, when you pitch a strike, Mr. Hornsby will let you know." - said to a rookie pitcher questioning a pitch that Klem called as a ball

"I Never Missed One in My Heart" - title of an article Klem wrote for Collier's magazine, 1951