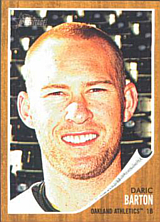 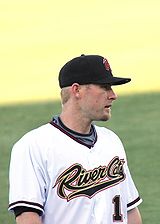 Daric Barton hit .372 his senior year in high school with 10 homers in 78 at bats. He was selected by the St. Louis Cardinals in the first round of the 2003 amateur draft, the first catcher and 28th player taken. He was signed by scout Dan Ontiveros and made his pro debut that summer. His rookie year, he hit .294/.420/.424 for the Johnson City Cardinals. His OBP was only 14 points behind Appalachian League leader Paul Frisella, but his 10 passed balls tied Danilo Reynoso for the league lead. Baseball America rated him the 5th best prospect in the circuit. In 2004, Barton batted .313/.445/.511 for the Peoria Chiefs. He was third in the Midwest League in average, led the MWL in OBP and drew the most intentional walks (10). He made the league All-Star team at catcher. Despite concerns about his defense, he was rated in the third-best catching prospect in baseball by Baseball America and the 2nd best prospect in the MWL, behind only Brian Dopirak. On December 18, he was traded to the Oakland Athletics, along with Dan Haren and Kiko Calero, for Mark Mulder, a trade widely belittled by the mainstream media as being a death blow to the A's.

2005 was another fine year as the 19/20-year old hit .318/.438/.469 with the Stockton Ports and .316/.410/.491 for the Midland RockHounds. He converted to first base this season and played for the US in the Futures Game, going 0 for 1. Overall, Barton's 97 walks tied for fourth in the minors. Baseball America rated him having the best strike-zone judgment in the California League. He was rated the 6th best prospect in the Cal League and #3 in the Texas League, behind Howie Kendrick and Erick Aybar. In 2006, Barton struggled. He hit only .259/.389/.395 in 53 games for the Sacramento River Cats, missing time due to a hyperextended elbow, elbow fracture and strained hamstring. He got back on track in 2007, hitting .293/.389/.438 with 38 doubles, 84 runs and 78 walks in 136 games for the title-winning Sacramento club. He tied Val Pascucci for 5th in the Pacific Coast League in OBP, tied Justin Leone for third in walks and was sixth in doubles.

Daric made his long anticipated major league debut on September 10, collecting 2 hits in 3 at bats against Seattle. He hit 8th and manned first base in that game. In his first MLB plate appearance, he walked against Horacio Ramirez. Daric was given the keys to the first base kingdom by Oakland in 2008. He struggled mightily in his maiden voyage, batting .226/.327/.348 in 140 games and managing just 31 extra base hits in a position dominated by power hitting brutes. During the All-Star break, he dove into a shallow pool and conked his head on the bottom, suffering a jammed neck and receiving staples to close open cuts. He was demoted to Triple A to start 2009, returning sporadically for 54 games with a much improved batting line of .269/.372/.413.

It all came together for Daric in 2010. He saw action in 159 games and set career marks in home runs (10), doubles (33), runs scored (79) while leading the junior circuit in free passes (110) and putting together a .273/.393/.405 slash line. The wheels fell off the following season. From 2011 to 2014, he did not manage more than 67 games in a season with only 4 total home runs. He was initially designated for assignment before the 2013 campaign but added back to the fold on several occasions due to injuries. On May 16, 2014, Barton was hitting .158/.234/.175 when the A's gave up on him and designated him for assignment for the final time. He became a free agent after the season as a minor league free agent. He logged time in the Toronto Blue Jays system in 2015, then enjoyed three solid seasons in Mexico, leading the Pericos de Puebla to their first league championship in over 30 years in 2016, en route to being named to the postseason league All-Star team. He retired following the 2018-2019 Mexican Pacific League season.