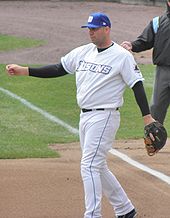 Val Pascucci was first drafted as a right-handed pitcher by the Milwaukee Brewers in the 11th round of the 1996 amateur draft out of high school. He did not sign and instead went to the University of Oklahoma. The tall hurler was 4-0 and struck out 64 in 58 innings but had a 7.29 ERA. He hit .333/.484/.514 his second year at Oklahoma, though, and would be converted to playing the field after being drafted.

The Montreal Expos drafted Pascucci in the 15th round of the 1999 amateur draft. The move to the outfield was a smart one as Valentino batted .351/.482/.541 and led the New York-Penn League in runs (62 in 72 games) and OBP. He stole 17 bases in 19 tries and was second to Vermont Expos teammate Matt Watson in batting average and seven points behind slugging leader Andrew Beinbrink. Pascucci made the league's All-Star team.

In the 2004 Caribbean Series, Pascucci went 5 for 19 with a double and a homer for the Ponce Lions.

In 2005, he spent most of the year at ni-gun, but filled in very well when Benny Agbayani was injured - Pascucci hit .284/.392/.549 in 33 games. His OPS was better than any of the team's three more prominent gaijin position players who started ahead of Pascucci - Agbayani, Matt Franco and Seung-Yeop Lee. He did not play in the 2005 Japan Series as these three gaijin took the three alloted slots for foreigners. Pascucci played for Italy in the 2006 World Baseball Classic and went 1 for 10 with a triple, two walks and five strikeouts while playing in all three games they were involved in.

Pascucci came back to the USA in 2007 with the Albuquerque Isotopes. Val was named the "Star of Stars" in the 2007 Triple-A All-Star Game. Pascucci made the PCL All-Star team as the designated hitter. Pascucci hit .284/.389/.577 for Albuquerque with 34 home runs, 93 runs and 98 RBI. He led the Pacific Coast League and Marlins farmhands in homers and was third in the affiliated minors. He had another good season in AAA in 2008, belting 25 doubles and 28 home runs while driving in 88 runs in 139 games between the Lehigh Valley IronPigs and the Norfolk Tides. He started the year with Lehigh Valley, a Philadelphia Phillies affiliate, and was released after a slow start. The New York Mets signed him and sent him to Norfolk, where he did very well. His batting line was .290/.410/.553 in 114 games for Norfolk and .232/.370/.293 in 25 contests for Lehigh Valley. However, he still did not earn a return visit to the Show.

Pascucci returned to the Italian team for the 2009 World Baseball Classic and was in the lineup as the team's clean-up hitter and designated hitter for its opening game against Venezuela. He played in the New York Mets organization in 2010, hitting .258 with 17 home runs and 38 RBI in 72 games for the Buffalo Bisons.