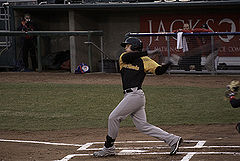 Third baseman Brandon Drury was selected by the Atlanta Braves in the 13th round of the 2010 amateur draft. He was signed by scout Brett Evert and made his pro debut that summer with the GCL Braves. The following year, 2011, with the Danville Braves, he hit .347 with 8 home runs and was named Appalachian League Player of the Year. Prior to the 2013 season, he was traded to the Arizona Diamondbacks as part of a seven-player deal.

He reached the majors with the Diamondbacks at the end of the 2015 season, then was a regular for the team in 2016 and 2017, playing 134 and 135 games. he was a utility player the first year, seeing time in left field, right field and at second and third base, hitting .282 with 16 homers and 53 RBIs. In 2017, however, he was the regular at second base, where he hit .267 with 13 homers and 63 RBIs. The Diamondbacks made it to the postseason, but he was back to being a reserve in the postseason, getting just 6 at-bats between the Wild Card Game and the NLDS. He did hit a homer and drive in 3 runs.

On February 20, 2018, he was traded to the New York Yankees in return for two prospects, 2B Nick Solak and P Taylor Widener. The Yankees had gone into spring training with rookies penciled in to start at both second and third base, so the addition of a player like Drury with major league experience at both positions was a key addition in case one of the two youngsters proved not to be yet ready for prime time. General Manager Brian Cashman stated that the initial plan was to have Drury be the starter at third base. This is precisely what happened, but on April 6th, he had to leave a game complaining of migraines and blurred vision, and was immediately placed on the disabled list. He then explained that he had been suffering from these symptoms for some time now, leading to pessimism about his return. When he was ready to return on May 14th after a rehabilitation assignment in AAA, the Yankees decided to keep Brandon down there, as rookie Miguel Andujar, who had taken over third base in his absence, was hitting well and the Yankees were playing as well as anyone in the majors. He hit .292 in 61 games between the AA Trenton Thunder and AAA Scranton/Wilkes-Barre RailRiders while coming back to New York for a couple of brief stints on the roster. On July 26th, he was traded to the Toronto Blue Jays along with OF Billy McKinney in return for P J.A. Happ. However, the continuing fall-out from his injuries limited him to just 8 games, during which he hit .154 (4 for 26).

He could well have fallen off the radar screen after his lost 2018 season, but in spring training in 2019, the Blue Jays made it clear that he was considered an important player going forward, and he proved them right by winning the starting third base job when the season started. He got off to a slow start, however, as he hit .179 in his first 22 games. On April 26th, he had to cede his third base job to super-prospect Vladimir Guerrero Jr., who was called up to make his eagerly awaited major league debut. However, due to the unavailability of SS Freddy Galvis, he moved over to second base, with Eric Sogard taking over for Galvis at short. He then was the hero of the game in the 9th inning: after Guerrero had led off the frame with a double for his first major league hit, and pinch-runner Alen Hanson had moved to third on a sacrifice bunt by McKinney, he took Yusmeiro Petit deep for a two-run walk-off homer for a 4-2 win, the first such homer of his career. Going forward, he was expected to share the second base job with Sogard and to occasionally fill in for Guerrero at third - until the Jays next superstar-in-the-bud, SS Bo Bichette was ready to join the big league club. Two days later, he added a three-run, game-tying homer off Blake Treinen in the bottom of the 11th; the Jays would go on to win the game a few batters later. That gave him 12 hits in 24 at-bats against the A's, including 7 extra-base hits, all of his damage thus far that season coming against that one team. On August 12th, he hit his first career grand slam as part of a 5-RBI night in a 19-4 rout of the Texas Rangers.