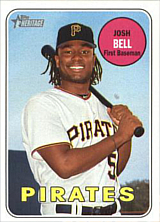 Josh Bell was a second-round pick in the 2011 amateur draft. He was a 2019 National League All-Star.

Bell hit .412/.528/.897 as a high school junior, then .556 with 14 home runs as a high school senior; he was named Gatorade Player of the Year in Texas and an All-American. Baseball America rated him the 5th-best position player and the top corner outfielder in the 2011 amateur draft. Due to a strong commitment to the University of Texas (he had sent letters to teams saying he planned to go to college, his parents held five degrees and his grandmother was a professor), he fell to the second round, when the Pittsburgh Pirates selected him. The Pirates had not taken a power-hitting position player in the first two rounds since Pedro Alvarez in 2008. Up until the day of the signing deadline, it was widely reported Bell would not sign. He and agent Scott Boras surprisingly did agree to a deal at the deadline, with a $5 million signing bonus; the scout was Mike Leuzinger.

Bell made his pro debut with the West Virginia Power in 2012. He hit .274/.288/.403 with 5 doubles and 11 RBI in 15 games, but with 21 strikeouts in 62 at-bats, before undergoing season-ending knee surgery. Healthy, he returned in 2013 to bat .279/.353/.453 with 37 doubles, 75 runs scored and 76 RBI. He tied Walker Gourley and Max Moroff for the most runs scored by Pirates farmhands, tied Matt Hague for most doubles, tied Brett Carroll for 6th with 13 homers and was 3rd in RBI (behind Andrew Lambo and Stetson Allie). He tied for 8th in the South Atlantic League in runs, tied for 6th in RBI and tied Jake Cave for 3rd in doubles. He joined Francisco Sosa and Nick Williams as the SAL All-Star outfielders. Bell began 2014 with the Bradenton Marauders and shone; in a pitcher-friendly environment, he hit .335/.384/.502 with 20 doubles in 84 games. He was picked for the 2014 Futures Game; replacing Hunter Renfroe in right field for the US in a 3-2 win, he grounded out against Enny Romero in his lone at-bat. Moved up to the Altoona Curve, he hit .287/.343/.309 in 24 games before a left knee contusion cut his season short. He led the Florida State League in average (.019 over Leonardo Reginatto) and slugging (.044 over José Osuna) and was named the FSL MVP (teammate Tyler Glasnow was named Pitcher of the Year) and the All-Star right fielder (Cave was picked in left field, Charlie Tilson in center). Baseball America named him the #8 FSL prospect (between Steven Matz and Orlando Arcia), #4 in the Pirates chain (after Glasnow, Jameson Taillon and Austin Meadows) and #64 in all of baseball. He was also named Pittsburgh's Minor League Player of the Year. The Pirates were loaded in the outfield, with Andrew McCutchen, Starling Marte and Gregory Polanco in the majors and Meadows also a top prospect, so they moved Bell to first base with the Scottsdale Scorpions in the Arizona Fall League. He batted only .214/.320/.310 and fielded .959 at his new position.

Bell kept up his strong pace in 2015, producing at a .307/.376/.427 clip in 96 games for the Altoona Curve and .347/.441/.505 in 35 contests for the Indianapolis Indians. He was named to play in the 2015 Futures Game, becoming the first Pirate prospect to appear in consecutive Futures Games. In the game, he hit a two-run homer off Edwin Diaz in the 4th inning as part of a 10-1 win by the United States. He was third among Pirates minor leaguers in average (behind Harold Ramirez and Adam Frazier), second in RBI (78, 3 behind Osuna), third in triples (9) and third in walks (65, behind Moroff and Keon Broxton). He made 16 errors in his first full year at first base. He hit .379 in the postseason, with 7 RBI in 8 games, and struck the winning single off Jeff Johnson in the bottom of the 9th in Game 4 of the finals. Baseball America rated him the #38 prospect in baseball, third in the Pirate chain behind Glasnow and Meadows. He was 0 for 4 in winter ball for the Leones del Caracas. Josh opened 2016 with the Indians, where he got the nickname "Tinker Bell" due to his constant tinkering with his batting stance. He was hitting .324/.407/.535 with 13 homers (tying a career high) after 83 games when he got the call to the majors as an extra bat right before the All-Star break, with Glasnow getting sent down as the team did not need a fifth starter for the last series.

The plan was that Josh would be up only for the series and then go back to the minors, as first baseman John Jaso was hitting well and manager Clint Hurdle did not want Bell riding the pine for long. He made his debut with the Pirates on July 8, called upon to pinch-hit for Neftali Feliz in the 7th inning of a game against the Chicago Cubs. Josh ripped a single off Bucco-killer Jake Arrieta before coming in to score on a throwing error as the Bucs took the lead in a game they would go on to win, 8-4. The following day, he batted for Arquimedes Caminero in the 5th and blasted a grand slam off Adam Warren as the Bucs won again, 12-6. The last game before the break, he was at it once more. Batting for Feliz in the bottom of the 7th with a 5-4 deficit, he drew a nine-pitch walk from John Lackey, advanced on a Jaso single and Marte grounder and scored on a McCutchen fly. In three major league plate appearances, he had 3 runs and 4 RBI. He played 45 games in the majors that first season, hitting .273 with 3 homers and 19 RBI while splitting his time between first base and right field.

Bell won the starting first baseman's job for the Pirates out of spring training in 2017, but started the year slowly, hitting .257 in April and .198 in May. The power was always there as he hit 9 homers during those first two months and also drove in 21 runs. He then kicked things up a notch, slugging over .500 during the next three months and eventually began to be used in the clean-up slot of the Pirates' lineup. He reached the 20-homer mark on August 12 then, on August 20, he was the hero of the first MLB Little League Classic as he connected for a two-run homer in the 1st and a two-run single in the 3rd off Mike Leake to lead the Pirates to a 6-3 win over the St. Louis Cardinals. When he hit his 24th homer on September 4, he set a new National League record for a rookie switch-hitter, besting the 23 hit by Chipper Jones in 1995. He finished the year with 26 homers. In 2018, he improved his batting average from .255 to 261 and his OPS+ from 109 to 111, but most observers considered he had an off year as his two most prominent numbers - homers and RBI - both went down significantly. He hit only 12 long balls and drove in 62 runs after reaching 90 as a rookie. Those totals were disappointing, but overall, he was still a productive player, having raised his walks and cut down his strikeouts, resulting in an excellent OBP of .357, and also hit 31 doubles. The impression of a poor season was due to it having been worse than 2017 until a very strong September/October (140 OPS+ for that period).

In 2019, Bell matched his previous season's home run total by mid-May and was one of the most productive hitters in all of Major League Baseball by that point. With a two-homer game in a 7-2 win over the San Diego Padres on May 18, he had 14 long balls on the year, including three two-homer games in a span of two weeks; he was also hitting .333 at that point. His most spectacular game came on May 8, when he had launched a 472-foot homer directly into the Allegheny River behind the right field fence at PNC Park, becoming only the 4th player to do so since the ballpark's opening 18 years earlier (the others had been Daryle Ward, Garrett Jones and Pedro Alvarez). The towering blast came against Shelby Miller of the Texas Rangers. His 30 extra-base hits through 43 games were the most by a Pirate since Paul Waner in 1932. Josh was named the National League Player of the Week for the first time in recognition of his hot hitting. He capped off a great month with a couple of hits in a 9-4 win over the Milwaukee Brewers on May 31, to give him a .389 average for the month with 12 doubles, 12 homers and 31 RBI. His 94 total bases were the most by a Pirates batter in any month ever, besting the 92 by Ralph Kiner in June 1947, and he was named the National League Player of the Month for May. He was a well-deserved choice to represent the Pirates at the 2019 All-Star Game, having just missed out on making it as a starter at first base (Freddie Freeman beat him out) but there was speculation he would start at DH. At the time of his selection, he led the league in doubles, extra-base hits and RBI. On July 1, he had perhaps his best game of the year, going 4 for 6 with 3 homers, 4 runs scored and 7 RBI in an 18-5 demolition of the Chicago Cubs. That brought his RBI total for the season to 77. He slumped badly after playing in the All-Star Game but, on August 26, he broke Bobby Bonilla's Pirates record for homers by a switch-hitter when he belted his 33rd. Overall, he batted .277/.367/.569 with 37 homers, 37 doubles, 116 RBI and 94 runs scored.

Expectations were high for Bell following his break-out 2019 season, but he regressed back to his previous level - and then some - in 2020. The season was of course limited to just 60 games by the Coronavirus pandemic, but Josh played just about every day for a last-place Pirates team that was badly outclassed by most of its opponents. In 57 games, he hit just .226 - the lowest batting average of his career thus far - with little power: just 3 doubles and 8 homers. As a result, his OPS+ fell all the way to 83, whereas his worst year before that at been at 108. In spite of his struggles, his 22 RBIs were just one off the team lead, with four Bucs players ending at 23 or 22 RBIs. Late that season, the Pirates brought up top prospect Ke'Bryan Hayes and put him at third base, where he had an outstanding final month. As a result, 3B Colin Moran no longer had a position, and the Pirates figured they could deal either him or Bell to obtain much-needed help at some other position, with whoever remained playing first base. On December 24th, they found a taker for Bell, sending him to the Washington Nationals in exchange for a pair of pitching prospects, Wil Crowe and Eddy Yean. He was joining a team with a gaping hole at first base, a perfect situation for him, as the three players who had manned the position in 2020 had either retired (Howie Kendrick) or were now free agents (Eric Thames and Asdrubal Cabrera). He remained active with Pittsburgh charities, speaking at a virtual Holocaust Center of Pittsburgh event entitled Athletes Against Antisemitism.

Bell played 144 games in his first season with the Nationals in 2021, having a bounce-back year by hitting .261 with 27 homers and 88 RBIs for an OPS+ of 125. The Nats were going nowhere, however, and went through a veritable fire sale at the trading deadline, but still hung on to Josh. He hit well again over the first four minths of 2022, batting .301 with 14 homers and 57 RBIs in 103 games, for an OPS+ of 153. Once again, given the Nats were still nowhere near contention, trade rumors were numerous approaching the deadline, although it was his teammate, OF Juan Soto, who had turned out a $400-million plus contract offer from the team who was the prize everyone wanted now that Washington was willing to move him with his value at its highest. In the end, on August 2nd, both sluggers went in the same deal, joining the San Diego Padres in return for six players: SS C.J. Abrams, P Mackenzie Gore, OF Robert Hassell, P Jarlin Susana, 1B Luke Voit and OF James Wood. the Padres also immediately traded incumbent 1B Eric Hosmer to the Boston Red Sox to make room for Josh in the starting line-up.