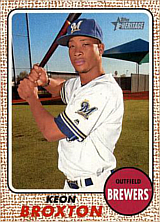 Outfielder Keon Broxton was originally drafted by the Philadelphia Phillies in the 29th round of the 2008 amateur draft out of high school, but he opted not to sign. He hit .340 with 10 homers in 48 games at Santa Fe Community College the next year, then did sign after being taken by the Arizona Diamondbacks in the 3rd round of the 2009 amateur draft (95th overall, right before Brett Wallach). The signing scout was Luke Wrenn. The fleet-footed Broxton hit 9 triples for the Missoula Osprey in just 72 games his first year, adding 11 home runs for the short-season club; he produced at a .246/.302/.474 clip. One negative was 93 whiffs in 272 at bats; another was the OBP. He led the Pioneer League in triples by 3 and tied Jared Clark for 7th in home runs but was also third in whiffs. Among Diamondbacks farmhands, he tied Cole Gillespie and Chris Rahl for third in three-baggers despite his late start. Keon stole 21 bags with 19 triples for Missoula in 2010, but hit only .228/.316/.360, struck out 172 times and was caught stealing 13 times. He easily led the Midwest League in triples (5 over Carlo Testa but also whiffed the most (8 more than #2 D'Vontrey Richardson). Among Arizona minor leaguers, he had 11 more triples than anyone else and led in strikeouts (11 more than Paul Goldschmidt). In all of minor league baseball, he led in triples (3 more than Francisco Peguero and Brett Lawrie). Baseball America rated him the #10 Arizona prospect entering 2011. That year, he stole 33 bases in 45 tries, scored 77 runs, drew 69 walks and struck out 172 times between the South Bend Silver Hawks (.231/.294/.282 in 20 games) and Visalia Rawhide (.251/.349/.362 in 110 games). He again led the Arizona farm chain in strikeouts (10 ahead of Bobby Borchering) while placing third in steals (behind A.J. Pollock and Adam Eaton).

Keon meshed power and speed in 2012, hitting 19 home runs and stealing 21 bases for Visalia; he produced at a .267/.326/.437 clip and scored 84 runs while cutting his strikeouts to 136. He was 6th in the Diamondbacks system in home runs while falling to second in strikeouts. Baseball America tabbed him the organization's best athlete. After an off year in 2013 (.231/.296/.359 for the Mobile BayBears, only 8 home runs and 5 steals), he hit .231/.313/.333 with 11 steals in 12 tries for the Sydney Blue Sox in the 2013-2014 Australian Baseball League. He tied Mike Crouse for fifth in steals. The next spring, he was traded to the Pittsburgh Pirates for cash. In his first year in the Pirates system, he hit 15 home runs and stole 25 bases for the Altoona Curve with a much better OPS: .275/.369/.484 was his batting line. He led the Eastern League with six intentional walks, tied Gift Ngoepe for second in triples (3 behind Alen Hanson), tied Hanson and Francisco Lindor for 7th in steals, was 6th in slugging (between Brian Burgamy and Willy Garcia), ranked 7th in OPS and even missed the top 10 in strikeouts (122, despite playing a full season). Among Bucco minor leaguers, he tied Hanson for third in steals and was 4th in dingers. He opened 2015 hot with Altoona (.302/.365/.464, 35 runs scored in 45 games) and reached Triple A for the first time in 2015 when he was promoted to the Indianapolis Indians; with the Pirates having an outfield of Andrew McCutchen, Starling Marte and Gregory Polanco, it appeared unlikely Broxton would get a regular look at the majors at that point. He hit .256 with 15 doubles, 8 triples and 7 homers for the Indians, with a combined batting line of .273/.357/.438 in 133 games, with 86 runs scored, 68 RBI and 39 steals.

Keon was called up when rosters expanded in September with the Pirates involved in a three-team pennant race with the St. Louis Cardinals and Chicago Cubs. He made his debut on September 21st as a pinch-runner in a game against the Colorado Rockies; he ran for Aramis Ramírez in the 9th inning, moved to second on a ground out, then stole third base and scored on a throwing error by Rockies catcher Tom Murphy. His run was not really crucial, as it made the score 9-3 in Pittsburgh's favor. Pitcher Bobby LaFromboise replaced him in the bottom of the inning. In 7 games, he had only two at-bats, but scored three runs, stole one base and was caught stealing once. On December 17th, he was traded to the Milwaukee Brewers, along with pitcher Trey Supak, in return for first baseman Jason Rogers.

With the Brewers in 2016, Broxton saw more regular playing time, logging 75 games playing exclusively center field. He hit .242 with 10 doubles, 9 homers and 19 RBI, also stealing 23 bases in 27 attempts. His season ended early as he crashed into the fence in a game against the Chicago Cubs on September 16th, breaking his wrist. In 2017, he was the regular center fielder, playing 143 games and hitting .220 with 20 homers and 49 RBI; he also scored 66 runs and stole 21 bases, showing good speed, but his OBP fell to a dismal .299 from .345 the previous year. It was not surprising that the Brewers looked for another center fielder after the season, and found one, in free agent Lorenzo Cain, who gave them an All-Star season. Keon was relegated to the bench, where he played 51 games and had just 78 at-bats, hitting .179. He also played 82 games in Triple A with the Colorado Springs Sky Sox and hit .254 with 10 homers and 37 RBI. The Brewers finished with the best record in the National League and he went 1 for 2 in the Division Series against the Colorado Rockies. His hit was a home run off Wade Davis in the 9th inning of Game 3 on October 7th after he had come in as a defensive substitute in right field, giving Milwaukee an insurance run in a 6-0 win at Coors Field.

Following the 2018 season, on January 5, 2019, he was traded to the New York Mets in return for Bobby Wahl, Adam Hill and Felix Valerio, the Mets acquiring him as insurance to back up oft-injured Juan Lagares in center field. Keon played 34 games for the Mets, hitting .143, before being traded to the Baltimore Orioles for international bonus slot money on May 22nd. His stay in Baltimore was also brief - 37 games hitting .204 - and he moved again on July 27th when claimed off waivers by the Seattle Mariners. With the Mariners on August 26th, he was ejected from a game against the New York Yankees when he tossed his batting gloves in protest at home plate umpire Manny Gonzalez's strike three call. One of the gloves hit the umpire in the face, leading to a further two-game suspension; Broxton appealed claiming the gesture was completely unintentional - in fact, he had his back to the umpire when he was hit by the flying glove. He was turned loose after the season and signed a minor league deal with the Brewers.