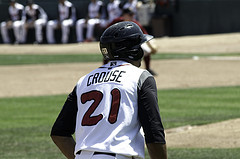 Michael Crouse is in his third minor league season in 2010.

Crouse was picked by the Toronto Blue Jays in the 16th round of the 2008 amateur draft. He was 2 for 15 with three walks and a triple that year for the GCL Blue Jays but he starred in the 2008 World Junior Championship. He joined Brett Lawrie as the only Canadians picked for the tournament All-Star team, selected with Yasiel Puig and Soo-bin Jung as the outfielders.