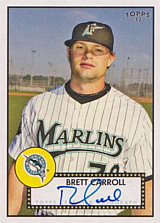 Brett Carroll was signed by the Florida Marlins and scout Brian Bridges as a 10th round pick in the 2004 amateur draft. He saw action in six big league seasons, with the bulk of his 180 games coming in a 92 game ride with the 2009 Fish, hitting .234 with 3 home runs. On June 8 of that season, he struck his first big league home run off Randy Johnson, becoming one of the few big leaguers to strike their first against a 300 game winner. In the same game, he also became the only man to hit a home run and triple off The Big Unit in the same game.