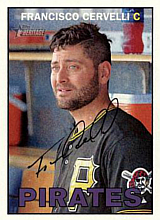 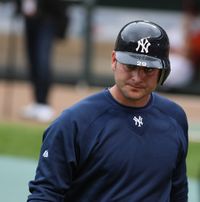 Francisco Cervelli won a World Series ring with the New York Yankees in 2009. A catcher by trade, his career was ravaged by concussions (at least six).

Cervelli was signed by scout Hector Rincones for the New York Yankees in 2003, making his debut with the DSL Yankees 1. He played for the same team in 2004 before coming stateside in 2005 with the GCL Yankees. He was seriously injured in a collision at home plate during spring training 2008 in a game against the Tampa Bay Rays. He had marched his way up the prospect ladder after hitting .279 with an OBP 100 points higher for the Class A Tampa Yankees in 2007. The injury shortened his season to 27 games for three different minor league teams. Still, he showed that he remained on track for the majors during his time with the AA Trenton Thunder, where he put up a line of .315/.432/.816 in 21 games. That earned him a late-season call up in September, and he went 0 for 5 in 3 games in his cup of coffee in pinstripes.

While Cervelli was born in Venezuela, his family background is Italian. He was recruited by the Italian national baseball team for the 2009 WBC and started his team's second game behind the plate against Canada. He was called up by the Yankees early in the 2009 season when regular catchers Jorge Posada and Jose Molina were sidelined in turn by injuries. He was carried during the postseason and earned a ring as the Yanks triumphed over the Philadelphia Phillies. In 2010, he officially took over as Posada's main backup. With Posada catching fewer games because of his age, he got a chance to play often. He batted very well - albeit with little power - in the early going, although his average fell back to his career norms as the season advanced. He showed good defense and an excellent ability to handle pitchers, giving manager Joe Girardi the chance to rest Posada more often and play him at DH after Nick Johnson was lost for the season to injury. In 93 games, he hit .271 with no homers and 38 RBI. He would never match this games played total with the Yankees again.

In 2011, with Posada becoming the full-time DH, Francisco (that's fun to say!) competed for the starting catching job with Russell Martin in spring training. Martin won and Cervelli backed him up, getting into 43 games and hitting .266 with 4 homers and 22 RBI. In 2012, he fell down one more step, losing the backup job to Chris Stewart and playing most of the year in AAA, with only 3 big league games. In 2013, Martin left as a free agent and the Yankees did not attempt to sign a veteran starter to take his place, relying on Cervelli and Stewart. In the early going, Cervelli got most of the playing time, but it came crashing down on April 26th, when Rajai Davis of the Toronto Blue Jays hit a foul tip that went straight to his right hand, breaking a bone and putting him on the shelf for an extended period. He was hitting .269 with 3 homers at the time. While on the disabled list, Cervelli accepted a 50-game suspension resulting from MLB's investigation of the Biogenesis Laboratories on August 5th and did not play again. His season lasted all of 17 games. Cervelli was back with the Yankees at the start of the 2014 season, serving as backup to the newly signed Brian McCann. On April 13th, he suffered a severe hamstring injury running the bases and had to go back on the DL. When he suited up, he hit well, batting .301. Unfortunately, he only played 49 games.

On November 12, 2014, the Yankees cut bait and traded Cervelli to the Pittsburgh Pirates for pitcher Justin Wilson. The Pirates were looking to add depth at catcher in expectation of not being able to re-sign starter, and Cervelli's old pal, Russell Martin. Cervelli became the starter for the Pirates in 2015 and played a career-high 130 games with excellent results. He hit .295 with 7 homers and 43 RBI, but was even more valuable defensively as he was able to step into Martin's huge shoes and steer the Pirates' pitching staff to another good season, in which they posted the second-best record in the majors. He had a streak of catching a shutout in five consecutive starts that year, one short of the modern record set by Ed Phelps in 1903. He was behind the plate when the Pirates hosted the Chicago Cubs in the Wild Card Game on October 7th and went 1 for 3 with a hit-by-pitch in the 4-0 loss. Cervelli was back starting for the Pirates in 2016 and played almost every day for the first six weeks. His hitting was a bit down, as he was at .257 with no home run after 49 games when he suffered a broken left hand on a swing on June 10th. The injury was expected to sideline him from six to eight weeks. As a result of an earlier injury, Cervelli now wore an oversized batting helmet designed to afford him more protection and reduce the risk of a future concussion. He played only 81 times in 2017 and 104 in 2018, booking return engagements to the new 7 day concussion injured list. In 2019, following his sixth concussion, he vowed to give up catching, later back tracking. He appeared in 48 games split between Pittsburgh and Atlanta, who picked him up following his release in August.

He announced his retirement following the 2020 season, which he spent with the Miami Marlins, explaining that his health did not allow him to continue playing, and in particular the numerous concussions that had plagued his career.

Cervelli moved into the coaching ranks in 2022 as the San Diego Padres' catching coach.