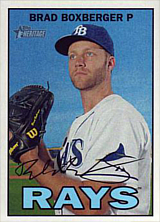 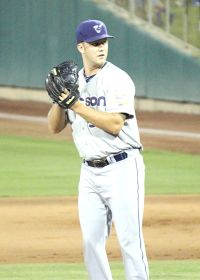 The son of Rod Boxberger, pitcher Brad Boxberger reached the majors with the San Diego Padres in 2012. He was the American League saves leader in 2015 with the Tampa Bay Rays.

Boxberger was drafted out of high school by the Kansas City Royals in the 20th round of the 2006 amateur draft. He instead chose to follow in his father's footsteps at the USC. In 2007, he went 3-5 with a 3.20 ERA in 14 games, and in 2008 he went 2-4 with a 6.12 ERA in 18 games. Boxberger was later chosen by the Cincinnati Reds in the supplemental first round of the 2009 amateur draft. He was signed by scout Rex de la Nuez and made his pro debut the following year with the Lynchburg Hillcats. He was 5-10, 4.91 in 36 games between Lynchburg and the Carolina Mudcats that first year. He was a starter at Lynchburg and moved to the bullpen when promoted to Double A Carolina. In 2011, he spent the entire season as a reliever between Carolina (1-2, 1.31 in 30 games) and the Triple A Louisville Bats (1-2, 2.93 in 25 games). He saved 11 games and struck out 93 batters in 62 innings. On December 17th, he was traded to the San Diego Padres, with Yonder Alonso, Yasmani Grandal and Edinson Volquez, in return for pitcher Mat Latos.

Brad made his major league debut with the Padres on June 10, 2012, pitching a scoreless inning of relief against the Milwaukee Brewers. He pitched 24 times for the Padres that first season, all in relief, with no decisions and a 2.60 ERA. Boxberger was sent to the Tampa Bay Rays on January 22, 2014, as part of a seven-player deal also involving Alex Torres and Logan Forsythe. On May 8th, he did something that had never been done before by a pitcher in the big leagues: he replaced David Price in the 6th inning of a game against the Baltimore Orioles with the bases loaded and nobody out. He then threw nine pitches to strike out the side, ending the threat without allowing a run. Even with his magnificent intervention, the Rays still lost the game, 3-1. He went 5-2, 2.37 in 63 games that season, picking up 2 saves and recording a whopping 104 strikeouts in 64 2/3 innings for a ratio of 14.5 strikeouts per 9 innings. In 2015, he became the Rays' closer and was successful in converting his first 15 opportunities. The streak ended against the Los Angeles Angels of Anaheim on June 3rd when he was called upon to make a four-out save but gave up the tying run in the 9th. Teammate Kevin Kiermaier bailed him out with a homer to lead off the top of the 10th and he ended up picking up the win. Brad went 4-10, 3.71 in 69 games and led the American League with 41 saves, making the All-Star team.

He underwent abdominal muscle surgery in March 2016, forcing him to miss the start of the season. He ended pitching just 27 games and did not reclaim the closer role, finishing at 4-3, 4.81 with no saves and only 24 1/3 innings. He again missed time in 2017 because of a right flexor strain, limited to 30 appearances. He improved to 3-3, 3.38 with 40 strikeouts in 29 1/3 innings. But, with Alex Colome having put up back-to-back seasons of 37 and 47 saves, it was clear there was no way he would be getting his old job back. The Rays traded him to the Arizona Diamondbacks on November 30th in exchange for minor league pitcher Curtis Taylor. He was used as the closer in 2018 and recorded 32 saves, although his other stats were so-so: a 3-7 record paired with an ERA of 4.39 in 60 games and 32 walks in 53 1/3 innings. He was a free agent after the season when Arizona failed to offer him a contract by the end of November, and on February 6, 2019, he signed a one-year deal with the Kansas City Royals for $2.2 million. Disaster struck in KC, and with a 5.40 ERA and 16/27 BB/K ratio in June, he was released. The Washington Nationals gave him a shot with their bullpen struggling mightily in the early stages of the year, but even a 1.04 ERA at Double A Harrisburg could not get him a big league call and he was released again on August 4. Cincinnati signed him and shipped him to Triple A Louisville, from which he was released on August 23.