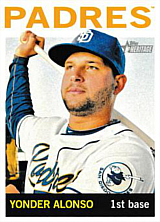 Yonder Alonso was a first-round pick by the Cincinnati Reds in the 2008 amateur draft; he made his debut with them in 2010.

Born in Havana, Alonso left Cuba for the USA in 1996, when he was 9 years old. He hit .405 as a high school freshman and .510 as a sophomore at Coral Gables High School in the Miami, FL metropolitan area. As a junior, he batted .420, followed by a .530 senior campaign, winning him All-State honors. He set single-season school records for average (.530), walks (33) and RBI (33) at the same high school attended by Mike Lowell. He was a 15th-round pick in the 2005 amateur draft by the Minnesota Twins but opted for college.

The first baseman hit .295/.373/.492 as a freshman at the University of Miami and became the second freshman in school history to lead the team in home runs (10) and RBI (69); Ryan Braun had done so previously. He hit .273 in the 2006 College World Series, then hit 8 home runs in the Virginia Valley League. Alonso batted .376/.519/.705 as a sophomore. He was second in the Atlantic Coast Conference in slugging and OBP, trailing Tony Thomas Jr.. He led the ACC in homers, tied with Allan Dykstra with 18. Alonso led the ACC with 64 walks and tied Dustin Ackley for the RBI lead with 74. He failed to make the All-Conference team due to the presence of Ackley at first base. Baseball America named him a second-team All-American behind Brett Wallace. He had an excellent summer for the Brewster Whitecaps of the Cape Cod League, hitting .338/.468/.497 and leading the league in OBP. He was third in average, .007 behind Conor Gillaspie. He tied for second in hits (51) and tied Reese Havens and Gillaspie for second in doubles (12). He was named the All-Star 1B. Baseball America rated him the 2nd best prospect in the Cape Cod League.

Alonso hit .367/.535/.774 with 24 homers, 73 runs, 71 RBI and 74 walks to 23 strikeouts as a college senior. Yonder was 5th in NCAA Division I in OBP, 9th in slugging, 6th in homers and first in walks (12 more than anyone else). He was two home runs behind ACC leader Buster Posey and was named All-Conference at first base. Baseball America and Collegiate Baseball named him All-American at DH while the American Baseball Coaches Association chose Ben Carlson; Justin Smoak was the consensus pick at first. The Cincinnati Reds chose the Cuban slugger 7th overall in the 2008 amateur draft. He was the third college batter chosen after Pedro Alvarez and Posey. He was signed by scout Tony Arias for a $2,000,000 bonus. Alonso made his pro debut with the Sarasota Reds on August 26, 2008, going 1 for 3 with a double, walk and run against the Clearwater Threshers. He hit .316/.440/.368 in his six late-season games for the team.

Baseball America rated him baseball's 35th-best prospect going into 2009. That year, Alonso hit .292/.374/.464 with 9 homers and 41 walks in 84 games between the GCL Reds, Sarasota Reds and Carolina Mudcats, missing time with a hand fracture. Baseball America rated him the 4th best prospect in the Florida State League after Mike Stanton, Jesus Montero and Domonic Brown and just ahead of Kyle Drabek and Starlin Castro. In the 2010 Futures Game, Alonso hit third and played first base in the World lineup, preceding Alex Liddi and Carlos Peguero in the heart of the order. In a 9-1 defeat, he was 1 for 4 at the plate. He struck out against Jeremy Hellickson in the first, flew out versus Zack Britton in the third and grounded out against Jordan Lyles in the 6th before singling off Anthony Slama in the 8th. In the minors that summer, the former Hurricanes star hit .267/.388/.406 in 31 games for Carolina and .296/.355/.470 in 101 for the Louisville Bats. He banged out 36 doubles and 15 home runs while his walk rate fell (just 56 free passes).

He got a September call-up to the Reds and made his major league debut on September 1, 2010, making an out in a pinch-hitting appearance against the Milwaukee Brewers. Stepping in for Brandon Phillips, he grounded out against Zach Braddock. Three days later, the former first-rounder pinch-hit for fellow heralded Cuban defector Aroldis Chapman in his second MLB at-bat and connected for a double off Mike MacDougal. He later scored on a hit by Joey Votto, the player blocking his path at first base. He hit .207/.207/.276 in 22 games in his first season, but went back to Triple A in 2011. He hit .296 with 24 doubles and 11 homers in 91 games with Louisville, then was promoted back to Cincinnati. He played mostly left field, making 14 starts at the position in 47 games, and hit a solid .333/.398/.545, including 5 homers. But it was clear that left field was not a long term solution to get the young slugger playing time, and on December 17th, the Reds packaged him alongside Yasmani Grandal, Brad Boxberger and Edinson Volquez to obtain starting pitcher Mat Latos from the San Diego Padres.

Alonso spent the 2012 season as the Padres' starting first baseman. He played 155 games and hit .273 with 39 doubles, although he only produced 9 homers playing his home games in pitcher-friendly Petco Park. His 62 RBI were second on the team, behind Chase Headley, but 14 more than the next best run producer. His OPS+ was 109, reflecting the difficult hitting environment in which he played. In 2013, he was set to become the brother-in-law of Manny Machado, as his sister Yannie became engaged to the Baltimore Orioles' third baseman. While he hit for a good .281 average, his power seemed to vanish completely, as he was limited to a paltry 11 doubles and 6 homers in 97 games. He managed to maintain an OPS+ of 104, because of Petco Park being such a hitters' graveyard that year, but his failure to connect for more extra-base hits was a big disappointment. In 2014, his average fell to .240 in 84 games, although his 19 doubles, 1 triple and 7 homers beat all three numbers from the previous year in many fewer at bats. The low batting average coupled with a precipitous drop in walks meant his OPS+ was down to 95 in spite of the increased power. Worst for him, his season ended early, as a torn tendon in his wrist put him definitely on the shelf in mid-August and made his future with the team uncertain. In 2015, injuries affected him again, limiting him to 103 games during which he hit .282 with 18 doubles, 5 homers and 31 RBI. His OPS+ was back up to 111 as his numbers were again deflated by the limited playing time and his tough home park. On December 2nd, he moved to a more hitter-friendly environment when the Padres traded him to the Oakland Athletics, along with LOOGY Marc Rzepczynski in return for pitcher Drew Pomeranz, minor leaguer Jose Torres and a player to be named (Jabari Blash).

Alonso's first season with Oakland was nothing special, as in 156 games, he hit .253 with 7 homers and 56 RBI in 2016. In 2017, however, he had a breakout year, as he set a new career mark for home runs before the All-Star break, hitting 20 homers, with 14 doubles and 43 RBI in 79 games in the first half. That got him selected to the All-Star team for the first time, backing up another first baseman who was having the best year of his career by a country mile, Justin Smoak. The Athletics were going nowhere that season, and a week after the trading deadline they struck a deal to send Yonder to the Seattle Mariners in return for young outfielder Boog Powell, a player the A's had drafted but traded away before he reached the majors. For his part, Alonso was going back to a tough home park, Safeco Field in Seattle being about as tough for hitters as Petco Park, which had completely sapped his power in San Diego. In 42 games, he hit .265 with 6 homers and 18 RBI, for a combined line of .266, 28 homers and 76 RBI in 142 games. On December 20th, he signed a two-year deal with the Cleveland Indians for $16 million; the Indians had just lost long-time starting 1B Carlos Santana to free agency, creating a perfect opening for Yonder to prove that his 2017 season had not been a fluke.

On March 31, 2018, he hit his first homer for the Indians, which also happened to be a grand slam and moreover the first grand slam of the 2018 major league season. He hit it off former teammate James Paxton of the Mariners in the 1st inning of a 6-5 win. He went on to hit .250 with 23 homers and 83 RBI, superficially decent numbers, but actually equivalent to an OPS+ of just 97, below average for any player and especially for a first baseman with limited defensive value. In the postseason he was hitless in 6 at-bats in the Division Series against the Houston Astros. The Indians decided to re-tool at the position (and also at DH) after the season, acquiring two first basemen in separate trades on December 13th, Carlos Santana and Jake Bauers. That made it clear the writing was on the wall for Alonso, and on December 14th, the Indians sent him to the Chicago White Sox in return for minor league outfielder Alex Call. He was joining a team with an entrenched incumbent at first base in Jose Abreu, so the two would likely have to share the position as well as the DH slot. It was rumored at the time Alonso's acquisition, coupled with free agent signing Jon Jay, was a ploy to lure Manny Machado onto the south side (Alonso being his brother-in-law and Jay being his best friend). However, Machado signed with the San Diego Padres.

Alonso's tenure with the White Sox was rough. He scuffled to a .178/.275/.301 line in 251 plate appearances before the ChiSox designated him for assignment and released him on July 3rd. The Colorado Rockies signed him to a minor league deal 8 days later and he returned to the bigs on July 23rd. In 54 games as a Rockie, he logged a mere 84 plate appearances but with better results with the stick (.260/.357/.479). These turned out to be his final major league at-bats, as although he signed as a free agent with the Atlanta Braves before the 2020 season, he failed to make the team. He was purchased by the San Diego Padres on August 12th, but never made it out of the alternative training site, and did not appear in the majors with either team - or in the minors, given the minor league season was cancelled altogether. The following November, he announced his retirement. He explained, however, that he wanted to remain involved in the game, by helping young players with some of the mental aspects of the game.