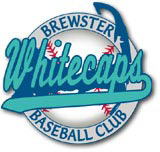 The Brewster Whitecaps are a member of the the Cape Cod Baseball League, which they joined as an expansion team in 1988. Their manager for that first season was Joe Walsh. The team play their home games at Whitecaps Field in Brewster, MA, a facility built specially for the team to start the 2007 season. The Whitecaps have won two CCL titles, 2000 and 2017. The 2000 championship was significant as manager Dave Lawn left the team just before the end of the regular season to take a job as an assistant coach at USC. Pitching coach Pat Shine took over and led the Whitecaps to their very first CCL title.

The Brewster Whitecaps invest in actively recruiting and training top players, and have hosted some of the best collegiate athletes from throughout the United States and Canada, including several Major League players.

The Brewster Whitecaps, like other summer college baseball teams, are dedicated and designed to provide minor league-style competition for NCAA players that wish to continue on into professional baseball and routinely send players to the MLB Drafts. The Whitecaps operate in the model of an Independent Minor League team: recruiting athletes, playing nightly before fans in stadiums which seat thousands, using wood bats and minor league specification equipment, and experiencing road trips between games. Like all other summer collegiate players, the Brewster Whitecaps are unpaid in order to maintain their NCAA eligibility, and live with host families in the same manner as Single A and Independent League players.