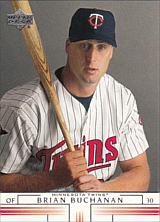 Buchanan managed in the Royals' chain for six years, then became hitting coach of the Northwest Arkansas Naturals in 2016. In 2017, he was named the Royals' assistant hitting coach but stayed in the position only that one season. He was the hitting coach with the Omaha Storm Chasers from 2018-2019. He was scheduled to return to Omaha in 2020 before the season was cancelled due to Covid-19 then did coach Omaha in 2021-2022.

Buchanan was the son-in-law of the late NBA all-time great John Havlicek.