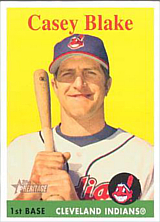 "He not only hits, he hits the good pitchers in key moments of the game." - Kenny Williams, then-White Sox GM

It took until his age 29/30 season for Casey Blake to stick in the big leagues, becoming a regular for the Cleveland Indians in 2003 after false starts in four seasons with a combined 49 games split between the Baltimore Orioles, Minnesota Twins and Toronto Blue Jays. He slugged 36 doubles and 28 home runs for the Tribe in 2004, and continued manning the hot corner until a deal to the Los Angeles Dodgers in 2008 for future Indian star Carlos Santana and pitcher Jon Meloan.

In thirteen seasons, even with the late start, Blake finished his career in 2011 with 167 home runs and 1,186 hits. In international play, he was 3 for 9 with a homer and a walk as Team USA's backup third baseman in the 1994 Baseball World Cup; Brian Dallimore was the starter.

Blake's father, Joe Blake, played minor league ball in 1971-1974, reaching AAA. Joe has been the pitching coach at Simpson College for over 25 years. Casey's three brothers also played pro baseball, including Ben Blake, who was the head coach at Simpson. [1]