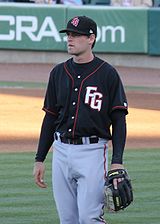 Conor Gillaspie was the first player from the 2008 amateur draft class to make his major league debut. He was a supplementary first round selection of the San Francisco Giants out of Wichita State University in June. He was signed by scout Hugh Walker and had only played a handful of games in the Arizona League and Northwest League without distinguishing himself in any particular manner when he was called up in early September, 2008.

Eight years later, having played for a number of other organizations in the interim, he was the hero of the 2016 National League Wild Card Game, alongside pitcher Madison Bumgarner. Starting at third base in place of an injured Eduardo Nunez, he hit a three-run homer off Jeurys Familia of the New York Mets in the top of the 9th inning, breaking a scoreless tie and providing all the runs Bumgarner needed as he pitched a complete game shutout. San Francisco won the game, 3-0 and moved on to meet the Chicago Cubs in the NLDS.