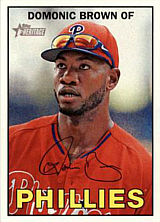 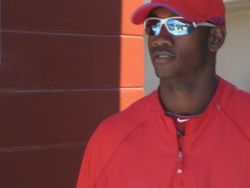 Domonic Brown made his major league debut in mid-2010. He is a nephew of Mudcat Grant and Julious Grant and is related to Nate Puryear.

Brown was taken by the Philadelphia Phillies in the 20th round of the 2006 amateur draft. He was signed by scout Chip Lawrence and made his pro debut that summer. Brown hit only .214/.292/.265 as a rookie with the GCL Phillies. In 2007, he was 4 for 9 with a double, homer and 7 RBI in three games for the Clearwater Threshers. When the short-season leagues opened, he was sent down to the Williamsport Crosscutters, for whom he put up a .295/.356/.400 line. He led New York-Penn League outfielders in both putouts (136) and assists (12), sparkling on defense. In 2008, the Florida native hit .291/.382/.417 for the Lakewood BlueClaws with 77 runs scored and 22 steals in 29 tries. He also had 12 outfield assists, but that was less than half of league leader Michael Burgess's total. Brown then batted .389 for the Honolulu Sharks of the Hawaii Winter Baseball league. He led the loop in average and was named an All-Star outfielder. Baseball America rated him Philadelphia's top prospect going into 2009. He hit .303/.386/.517 in 66 games for the Clearwater Threshers, was 5 for 10 with two triples for the GCL Phillies (on a rehab stint after missing a month with a fractured finger) and finished batting .279/.346/.456 in 37 contests for the Reading Phillies. Overall, he had 9 triples and 23 steals in 33 tries, plus was showing more pop with 14 home runs. He tied Anthony Gose for the most three-baggers by a Phillies minor leaguer. Baseball America rated him the #3 prospect in the Florida State League after Mike Stanton and Jesus Montero and ahead of Yonder Alonso, Kyle Drabek and Starlin Castro.

Returning to Reading to open 2010, Brown was hitting .325/.395/.614 with 15 homers, 49 runs and 46 RBI in the first 63 games. He was then put on the US roster for the 2010 Futures Game. Starting in right field and hitting cleanup between future Kansas City Royals stars Mike Moustakas and Eric Hosmer, Brown faced Simón Castro in his first at-bat and singled in Desmond Jennings. He advanced on a single and took third on a wild pitch, but then had to leave due to hamstring tightness; Mike Trout pinch-ran for him. Two weeks later, he was called up to Philadelphia when starting center fielder Shane Victorino went on the disabled list. Making his debut against Edwin Jackson of the Arizona Diamondbacks on July 28th, he hit a double to the wall in his first at-bat, driving in a run and coming in to score as the Phils recorded a 7-1 win; he added another hit, RBI and run scored later in the game. He finished his first season with the Phillies hitting .210 in 35 games, after putting up a batting line of .327/.391/.589 in 93 games between AA Reading and AAA [Lehigh Valley IronPigs|Lehigh Valley]]. The Phillies put him on their postseason roster, but he went hitless in three plate appearances over the two rounds and was not really a factor as the Phils bowed out to the San Francisco Giants in the NLCS. At season's end, Baseball America listed him the top prospect in the Eastern League, right ahead of Zack Britton and Kyle Drabek.

After the season, right fielder Jayson Werth departed via free agency and the Phillies all but handed his job to Domonic before the 2011 season began. Things did not go as planned. He was hurt in spring training, and it was Ben Francisco and John Mayberry Jr. who shared playing time in the outfield when the season opened. When he finally got to play, Brown disappointed, hitting .245 in 56 games. With the Phillies determined to make a push for another World Series title, this was not enough production from a corner outfielder, and at the trading deadline, they acquired All-Star right fielder Hunter Pence from the Houston Astros, and he started hitting like gangbusters. Back at Lehigh Valley, Brown was having a so-so year, hitting .261 in 41 games, with only 6 doubles and 3 homers. In 2012, he continued to sputter, hitting .235/.316/.396 in 56 games, with 5 homers and 26 RBI. He also played 60 games at Lehigh Valley, where he hit .286 with 5 homers and 28 RBI in 60 games.

Brown finally showed some of the superstar-level production that had long been expected from him when he was named the National League's Player of the Month for May 2013. That month, he hit 12 home runs and picked up 25 RBI, batting .303, and slugging .688. Critics were quick to point out that he had not collected a single walk during the month while striking out 21 times, a ratio that made it unlikely that he would able to sustain his newfound success. On June 25th, he hit his 20th homer of the year, in a 6-2 win over the San Diego Padres, reaching that level for the first time with more than half of the season still to play. He was named to the NL All-Star team that summer and finished the season with a .272 average, 27 homers and 83 RBI, good of an OPS+ of 124.

Brown's production tumbled in 2014, as he was unable to match the numbers of the previous year. His batting average fell back to .235 with 10 homers and 63 RBI, even though he actually played more games than in 2013 - 144 against 139. His OPS+ also fell, to well below average 77. The Phillies had to wait to find out which of the 2013 or 2014 version of Brown was the real one, as he started the 2015 season on the disabled list, victim of tendinitis in his left Achilles' tendon. As a result, he only played his first game on June 14. He was injured again in September, in what turned out to be the final game of his big league career. On September 2, 2015 against the surging New York Mets, Brown tumbled into the right field stands trying to make a play on a ball hit by Rubén Tejada. Tejada ended up with an inside the park home run; Brown tried to stay in the game but departed in the 4th with a head injury. In 63 games, he batted .228 with 5 homers and 25 RBI. At season's end, the Phils outrighted him off the 40 man roster. Prior to the 2016 season, Domonic accepted a minor league deal with the Toronto Blue Jays and batted but .239 with 7 homers and 41 RBI in the pitcher-friendly International League for the Buffalo Bisons. He started 2017 in the Colorado Rockies chain and was released from his deal with the Albuquerque Isotopes in July despite hitting .304 in 48 games. Heading south of the border to continue his career, Dom spent 2018 and 2019 in the Mexican League, hitting 43 homers in 174 games.