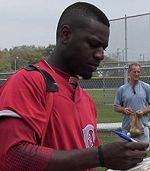 On August 1, 2007, Brandon Phillips stole second and third base on the same pitch, while the infield shifted for Adam Dunn. It was not an entirely unprecedented feat, but it was still extremely rare and equaled a record. On September 5th, he hit his 28th homer of the season, breaking Joe Morgan's record for a Cincinnati Reds second baseman. He ended the season with 30.

Phillips was the starting second baseman and second-place hitter for Team USA in the 2013 World Baseball Classic. He returned to the All-Star Game after a one-year absence in 2013, being voted the starting second baseman by fans. He was in negotiations for a renewal of his contract with the Reds at that time and received a lot of negative publicity for calling the Reds' offer of $72.5 million a "slap in the face", as it was much smaller than the $225 million offered to Joey Votto over 10 years in 2012.

After the 2015 season, the Reds sought to trade him as part of a major rebuilding. A tentative deal was reached with the Washington Nationals in December, but it fell apart as Phillips vetoed it as a ten-year veteran who had played the last five seasons with the same club. The scenario repeated itself in 2016, with a potential trade to the Arizona Diamondbacks falling through, and one more time in January of 2017, when this time it was a trade to his hometown Atlanta Braves that Phillips reportedly vetoed. In that last case, however, he denied that he had been approached to approve the deal. A trade to Atlanta finally happened on February 13, 2017. Phillips was traded in return for Ps. Andrew McKirahan and Carlos Portuondo with the Reds picking up much of the remaining salary due him. He played 120 games for Atlanta, hitting .291 with 11 homers and 92 RBIs. On August 31st, just six months after the Braves had acquired Phillips, they traded him to the Los Angeles Angels of Anaheim in exchange for minor league catcher Tony Sanchez.

Even though he last appeared in a major league game with the Boston Red Sox at the end of the 2018 season, as of May 2021 he was still active in baseball, playing in the independent Atlantic League. He retired as a player after that season.

Phillips is the greatest "Cubic Player" of all time: he has more career games than anyone else in which his uniform number, position and rank in the batting order matched. In his case, he wore number 4, played second base (which is number 4 on a scorecard) and usually batted clean-up (fourth in the batting order). He achieved this particular combination exactly 700 times in the majors, beating out Hall of Famer Brooks Robinson at 668. Most of this list is dominated by first and third basemen, who have 9 of the top 10 totals. For the record, there as never been such a game by a pitcher and those by catchers and right fielders are extremely rare.