Alex Colome entered 2012 as a high-ranking prospect for the Tampa Bay Rays. The nephew of Jesús Colome, he reached the big leagues a little over a year later.

In 2009, Colome blossomed, going 7-4 with a 1.66 ERA for the Hudson Valley Renegades, striking out 94 in 76 innings. He allowed a .174 opponent average. He was 7th in the New York-Penn League in wins, first in strikeouts (11 ahead of runner-up Marty Popham) and second in ERA (behind Jose Alvarez). Baseball America upgraded him to the 8th-best Tampa Bay prospect. They also named him as the #2 prospect in the NYPL, behind Ryan Westmoreland.

The Dominican righty was 6-6 with a 3.95 ERA for the 2010 Bowling Green Hot Rods (118 K in 114 IP) and struck out 8 with one run allowed in four innings for the Charlotte Stone Crabs. Baseball America listed him as the 16th-best prospect in the Midwest League (between Rubby de la Rosa and Chris Owings) and as #9 in the Tampa Bay organization.

Colome split 2011 between Charlotte (9-5, 3.66, .214 opponent average) and the Montgomery Biscuits (3-4, 4.15, .219 opponent average). He struck out 123 in 157 2/3 innings while walking 72 and throwing 17 wild pitches. Among Tampa Bay farmhands, he tied for second in wins (with Matt Moore and Victor Mateo, behind George Jensen), tied for third in wild pitches, tied for fifth in strikeouts and was third in walks. Baseball America ranked him as the #5 Tampa Bay prospect and the #5 Florida State League prospect (behind Shelby Miller, Matt Harvey, Hak-ju Lee and Trevor May).

Colome was called up to make his major league debut as the starting pitcher against the Miami Marlins on May 30, 2013. He replaced Jake Odorizzi, who was sent down. It was a successful debut, as he pitched 5 2/3 innings, giving up only an unearned run on five hits and two walks while striking out seven. He received credit for the Rays' 5-2 win. Surprisingly, pitching for a team known for developing its own players, he was the first product of the Rays' Dominican Academy to reach the major leagues. He went 1-1, 2.25 in 3 starts that year, then in 2014 followed that by going 2-0, 2.66 in 5 games, 3 of them starts, in 2014. Following these first two successful [cups of coffee]] in the majors, he played his first full season for Tampa Bay in 2015. Used as a swingman, he made 13 stars in 43 appearances, going 8-5, 3.94 and pitching 109 2/3 innings. 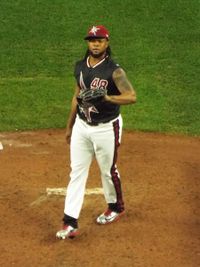 In 2016, Alex was moved into the closer job and had a breakthrough season. He made the All-Star team, recorded 37 saves and went 2-4 with a sparkling ERA of 1.91. In 56 2/3 innings, he struck out 71 opponents while issuing just 15 walks. He was less dominant in 2017 but led the American League in saves with 47 as he went 2-3, 3.24. He made 65 appearances, pitched 6 2/3 innings, but saw his K/W ratio fall to 58/23. In spite of the large number of saves he compiled those two seasons, he was in playing in relative anonymity, as the Rays were a middling team not attracting much media attention. Tampa Bay decided to start a major rebuild during spring training in 2018, a decision that was quite controversial as it seemed to confirm the developing narrative that a third of major league teams had no intention whatsoever of fielding a competitive team that year. As an established closer just coming into his prime, a luxury on what was expected to be a losing team, he was widely expected to be among those traded, but he started the year in his familiar role. On May 25th, the anticipated trade did come, however, as he joined fellow veteran Denard Span in a trade to the Seattle Mariners in return for two young pitchers, Andrew Moore and Tommy Romero. He was 2-5, 4.15 in 23 games with 11 saves at the time. With the Mariners, he was the set-up man for major leagues saves leader Edwin Diaz and went 5-0, 2.53 in 47 games with just 1 save but 30 holds. However, Seattle faded in the second half after having made a bid for a postseason slot.

After the 2018 season, the Mariners decided to shed some payroll after their bid to make the postseason had failed. Alex was one of the players to be sent away, as on November 30th he was traded to the Chicago White Sox in return for C Omar Narvaez.