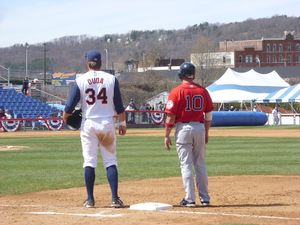 Lucas Duda on the left, wearing #34

Lucas Duda is an outfielder/first baseman who made his debut with the New York Mets in 2010.

Duda hit .493 as a high school junior and was named All-State in California as a senior. Lucas went on to college at USC. He hit only .208 in 34 games as a freshman and had a wrist injury as well. As a sophomore, he improved to .298 as the starting USC first baseman. He then batted .273 with 8 homers and 49 RBI for the Alexandria Beetles, winning honors as a Northwoods League All-Star. In his junior year, Duda batted .280 with a team-high 7 home runs while moving to left field.

Duda spent 2009 with the Binghamton Mets, batting .281/.380/.428 and fielding .996 at first base. In 2010, he was with the AAA Buffalo Bisons after starting the year in Binghamton, where he hit .286 in 45 games. In his first taste of AAA, he put up a tremendous batting line of .314/.389/.610 in 70 games, exploding for 23 doubles and 17 homers in only 298 at-bats while spending most of his time in left field. That sizzling bat earned him a ticket to New York when rosters expanded on September 1 and he was immediately inserted in the Mets' starting line-up. After going hitless in his first two games, he picked up his first major league hit, a double against the Chicago Cubs' Randy Wells, on September 3rd. He also had the first run, RBI and walk of his major league career that day. However, he then went on an 0 for 16 skein that dropped his batting average to .036. He did much better afterwards, picking up another 5 doubles and 4 homers, to finish his first month of major league action with a batting line of .202/.261/.417 in 29 games.

In 2011, Duda spent the majority of the season with the Mets, playing 100 games with a batting line of .292/.370/.482, good for an OPS+ of 137, collecting 21 doubles and 10 homers along the way. He started 42 games in the outfield and 37 at first base. He started the year with the big league team before being sent down in early May, when he was hitting only .100 in 10 games. He thus went back to Buffalo, where he played 38 games, hitting .302 with 8 doubles and 10 homers. He returned to the Big Apple on June 10th and hit much better the rest of the year. 2012 was also split between the big leagues and AAA: he began the year in New York, and stayed until late July; he was hitting only .241 when he was sent down to Buffalo on July 22nd and played 25 games in AAA, before being recalled on August 26th. In Buffalo, he hit .260 with 3 homers and 8 RBI, and in 121 games with the Mets, his batting line was a disappointing .239/.329/.389. Because of relatively low offensive numbers throughout baseball, his OPS+ was close to average at 98, and he had 15 doubles and as many homers while driving in 57 runs. That year, with 1B Ike Davis back from an injury, Lucas played mainly in the outfield, making 100 starts between right field and left field and only 4 at first base. However, he suffered a broken right wrist while moving furniture at his home in California in the off-season and had to undergo surgery in early November, a bad development for a player whose spot in the line-up in 2013 was far from assured.

Duda managed to be healthy in time for spring training and kept his position in 2013, being one of the few true power threats in the Mets' line-up, especially with 1B Davis struggling and being sent down to the minors in June. Indeed, he moved from his regular spot in left field to fill in for Davis at first base after the demotion. He was hitting .235 with 11 homers and 23 RBI after 68 games when he was placed on the disabled list on June 22nd, victim of a strained muscle between his ribs. He finished with a .223 average, 15 homers and 33 RBIs in 100 games. He then had a breakout season in 2014, as he collected 30 homers and drove in 92 runs as the Mets' starting first baseman. He also hit .253 in 153 games and ended up with an OPS+ of 137. The Mets showed their confidence in his future production by signing him to a lucrative long-term contract after the season. He then started 2015 red hot, hitting .395 with 6 doubles and a homer over his first 10 games. He then went through an extended slump before heating up again in July. On July 29th, he had a three-homer game against the San Diego Padres at Citi Field; unfortunately, all three homers were solo shots, and they were all of his team's offensive output in a 7-3 loss. The first of the long balls broke a streak of 16 consecutive starts without allowing a home run by Padres starter Tyson Ross, a team record. On August 22nd, he was placed on the disabled list with lower back pain. He played 135 games, hitting .244 with 27 homers and 73 RBIs as the Mets won the NL East title. The Mets then made it all the way to the World Series, but Lucas had trouble getting untracked, hitting only one long ball, off Jason Hammel of the Chicago Cubs in Game 4 of the NLCS on October 21st. He added a pair of doubles and had 5 RBIs in that game, an 8-3 win, but had no other extra-base hits in the other 13 games in which he saw action.

In 2016, Duda was hitting .231 with 7 homers and 19 RBIs in 39 games when he was placed on the disabled list with a stress fracture in his lower back on May 23rd. He was expected to be out for four to six weeks but did not return until late September when he played another 8 games. He then did not play in the Mets' loss to the San Francisco Giants in the Wild Card Game. In all, he hit .229 in 47 games, with 7 homers and 23 RBIs. He was back in the starting line-up on opening day in 2017, however. On April 11th, he had a two-homer game in a 14-4 rout of the Philadelphia Phillies, but his performance was overshadowed by that of teammate Yoenis Cespedes who hit three long balls as the Mets went deep seven times. He made another sojourn on the DL, missing almost a month between mid-April and mid-May, one of a large number of Mets players to miss time in the first half of the season. After 75 games, he was hitting .246 with 17 homers and 37 RBIs when on July 27th he was traded to the Tampa Bay Rays in return for pitching prospect Drew Smith. In his first game with the Rays on July 28th, he homered off Masahiro Tanaka of the Yankees to account for his team's only run in a 6-1 loss, and homered again the next day in another loss to the Yankees. He ended up playing 52 games for the Rays and while he batted just .175, eh did hit 13 homers and drive in 27 runs. He finished with a combined average of .217 in 127 games, matching his career high with 30 homers, adding 28 doubles and 64 RBIs.

Duda was one of a great number of free agents who still had not found a job when spring training started in 2018. He had to wait until February 28th when he signed with the Kansas City Royals, who had just learned the previous week that their off-season-long efforts to re-sign 1B Eric Hosmer had failed. He played 87 games for the Royals, hitting .242 with 13 homers and 48 RBIs, for an OPS+ of 97. On August 29th, he was traded to the Atlanta Braves, moving from a last-place team to a first-place one. He went 4 for 18 in 20 games for the Braves, then was 0 for 3 in the Division Series against the Los Angeles Dodgers. In 2019, he went to spring training with the Minnesota Twins but did not make the team and was cut on March 20th. However, the very next day, he was signed again by the Royals.

Not surprisingly, the opposing team's public address system will often play the Camptown Races when he comes to bat.