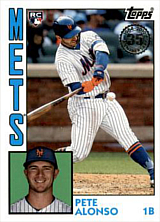 First baseman Pete Alonso was selected by the New York Mets in the 2nd round of the 2016 amateur draft, out of the University of Florida. He did not waste time having an impact in professional baseball, as in his first season (2016) he batted .321 with 5 homers and 21 RBI in 30 games for the Brooklyn Cyclones of the New York-Penn League. He began the 2017 season with the St. Lucie Mets of the Florida State League, where he hit .286 in 82 games, earning a late season promotion to the Binghamton Rumble Ponies of the Eastern League. There, he hit .311 in 11 games to finish with a batting line of .289/.359/.524 with 27 doubles and 18 homers in 93 games.

He confirmed his status as a prime hitting prospect in the first half of the 2018 season, when he hit .314 in 65 games for Binghamton, earning another promotion, this time to the Las Vegas 51s of the Pacific Coast League. With Mets fans clamoring for his call-up with veteran Adrian Gonzalez, who was starting up in the Big Apple, showing he was clearly washed up, he was named to the United States team for the 2018 Futures Game. He replaced Nate Lowe at first base mid-game and in the 7th inning hit a monstrous home run off Adonis Medina on a full count after a long battle. The 2-run shot sealed a 10-6 win for the U.S. In 132 games between Binghamton and Las Vegas, he hit .285/.395/.571 with 31 doubles, 36 homers and 119 RBI. In earlier times, this would have earned him a September call-up to the Big Apple, but the Mets were wary of service time issues and decided not to give him a look.

He was one of the big stories of spring training for the Mets in 2019, as he continued to hit extremely well, but the Mets were still playing coy, leaning towards having him start the year in Triple A and only calling him up after a couple of weeks, after just enough time to delay his eligibility for salary arbitration by a year, just as the Chicago Cubs had done with Kris Bryant a few years earlier. This was becoming an ever more serious issue for the Players Association and its head, Tony Clark stated it clearly: "Seeing what players are going through where their service time is being manipulated, on the front end and/or in the middle, is a concern, has been a concern and will continue to be a concern." His concern was that teams were not putting their best players on the field because of such financial concerns, depriving fans of the best possible competition.

However, Pete impressed the Mets enough to waive these concerns, starting the year on the major league roster. He made his debut Opening Day, March 28th, starting at first base and going 1 for 4 in a 2-0 win over the Washington Nationals. He hit his first career homer April 1st off Drew Steckenrider of the Miami Marlins. It came with two men on in the 9th, after the Mets had broken through to take a 4-3 lead, and sealed his team's 7-3 win. He was named the National League Rookie of the Month for April after hitting .292 with 9 homers and 26 RBI during the month. On May 29th, he had another two-homer game in a 9-8 loss to the Los Angeles Dodgers, giving him 10 for the month - a new Mets rookie record - and 19 for the year. This tied him with Mark McGwire for most homers before June 1st. On June 22nd, his 26th homer tied the Mets rookie record for a season held by Darryl Strawberry, set in 1983; he also broke Cody Bellinger's NL record for most homers before the All-Star Game. He set a new Mets rookie record with another homer the next day. He was named to the 2019 All-Star Game as a result of his great first half and was again named NL Rookie of the Month, for June. He hit his 30th home run in the Mets' last game before the break, on July 7th.

Pete won the annual Home Run Derby staged at Progressive Field on July 8th, outhitting Vladimir Guerrero Jr. in the final round in a battle of rookies. The $1 million prize he took home more than doubled his annual salary. He hit his 35th homer of the year on August 5th, a 5-4 win over the Marlins that put the Mets above .500 for the first time since May 2nd. On August 15th, he tied the NL rookie record set by Bellinger in 2017 with his 39th homer, and set a new record with 40 on August 18th. On August 24th, he tied the franchise record with his 41st homer, equaling the mark shared by Todd Hundley and Carlos Beltran. His 42nd homer on August 26th gave him sole possession of the team record. He kept on hitting long balls after that, reaching another milestone on September 20th with number 50. On September 27th, he hit number 52, tying the all-time rookie record set by Aaron Judge two years earlier. He claimed sole possession of the record the next day when he hit his 53rd off Mike Foltynewicz of the Atlanta Braves in the Mets' penultimate game. He was named the league's Rookie of the Month again in September, book-ending his season with the award. His final line: 161 games, a .260 average, 30 doubles, 53 homers, 103 runs scored and 120 RBI, good for an OPS+ of 148. After the season, he was named the National League's Rookie of the Year.

He started the 2020 season very slowly, as after 12 games on August 5th, he was batting just .174 with 1 homer and 4 RBIs. His power came back slowly after that, although his average remained around .200 until the end of August. On September 3rd, he hit the first walk-off homer of his career, connecting off Albert Abreu of the New York Yankees in the 10th inning for a 9-7 win. He had gone 0 for 4 with a pair of strikeouts until then, and had also committed an error for the third straight game. He finished the season at .231 with 16 homers and 35 RBIs in 57 games and an OPS+ of 122. His home run total was just 2 behind that of the National League leader, Marcell Ozuna. His first half of the 2021 season was very similar to the shortened 2020, as he hit .250 before the All-Star break, with 17 homers and 49 RBIs in 77 games, with an OPS+ of 123. He was not named to the All-Star team, but was asked to defend his title in the Home Run Derby, and he did it in masterful fashion on July 12th at Coors Field, banging a record 35 homers in the first round, and continuing to crush the ball in the next two when he defeated Juan Soto and Trey Mancini. He passed Mancini by homering on his last five swings. It was not only the total that was impressive, it was also the style: he hardly seemed to break a sweat, was thoroughly enjoying himself the whole way through, and hit more monster shots than all of his competitors combined, although the longest ball of the night was hit by Soto. In claiming the $1 million bonus, he more than doubled his annual salary of $667,000. On September 7th, he hit homer run #100 of his career in his 347th major league game; only Ryan Howard had done this in fewer games - 325. He finished the season at .262 in 152 games, with 37 homers and 94 RBIs, good for an OPS+ of 134.

He suffered a potentially serious mishap on the way to the delayed start of spring training in 2022, when he was involved in a serious road accident on March 13th. He explained that another driver t-boned his vehicle after running a red light and that his own vehicle flipped three times as a result. He had to kick out the windshield to escape - thankfully without injury. Another good point was that his wife was driving in a separate car behind him - and not sitting in the passenger seat - so she escaped uninjured and could help her husband extricate himself from the wreck. Ever positive, he commented to the media after being able to participate in his first workout with teammates later that day: "Today's is really special for me. I just had a blast out there today doing work, seeing everybody. I don't think I've ever been happier showing up to spring training."