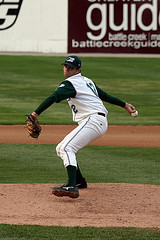 Andy Sonnanstine was drafted by the Tampa Bay Devil Rays in the 13th round of the 2004 amateur draft. He was signed by scout James Bonnici and made his pro debut that summer.

In 2011, he co-authored with Tucker Elliot a book called Tampa Bay Rays IQ: The Ultimate Test of True Fandom.

After being out of baseball since 2011, Sonnanstine began working on a knuckleball in 2016 with the hope of returning to the major leagues by throwing the specialty pitch.