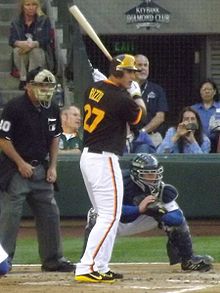 Anthony Rizzo reached AA in 2010 and made his major league debut one year later.

Rizzo was sent to the Tucson Padres of the AAA Pacific Coast League to begin 2011 and hit extremely well in the early going, confirming his status as a top prospect. In 52 games, he was hitting .365/.444/.715, with 20 doubles and 16 homers, when he got the inevitable call to The Show. At the time, he was tied with Bryan LaHair for third in the PCL in home runs, led in RBI (5 over Mike Carp), was third in doubles and was 5th in slugging.

He made his debut with San Diego on June 9th, playing first base and hitting 7th against the Washington Nationals. He reached base 3 times in 4 plate appearances, with a triple and a pair of walks, as the Padres won, 7-3. In his first at-bat, he struck out against Liván Hernández but tripled his next time up against the Cuban veteran. Two days later, he hit his first career homer, off John Lannan; that homer was a prodigious blast, landing in the hard-to-reach right field bleachers at PETCO Park. However, he struggled after that promising debut, and by July 21st, he was hitting only .143 in 98 at bats with 36 strikeouts when the Padres decided to send him back down to Tucson for more seasoning. He was replaced on the roster by Kyle Blanks. He ended the season with a batting line of .331/.404/.652 in 93 games at Tucson, and .141/.281/.242 in 49 games with the Padres.

On January 6, 2012, Rizzo was traded to the Chicago Cubs along with P Zach Cates, in return for P Andrew Cashner and OF Kyung-Min Na. It marked the second time in two years that Jed Hoyer, now the Cubs' GM had traded for Rizzo and he explained that he saw him as the team's first baseman of the future, adding however that the minor league veteran LaHair, who had just earned the PCL's MVP award, was the team's first choice to man first base in the coming season. Thus, he started the season in the minor leagues, hitting .342 with 18 doubles and 23 homers in 70 games for the Iowa Cubs. While LaHair was one the most productive hitters with the big-league Cubs, the team was struggling and could not afford to keep Rizzo in the minor leagues when he was hitting so well. He was called up to the team on June 26th, starting at first base with LaHair moving to the outfield. He had 2 hits, including a double, and an RBI in his debut. On June 30th, he hit his first homer as a Cub off J.A. Happ in a 3-2 win over the Houston Astros. He went on to have an excellent month of July, earning Rookie of the Month honors in the National League by hitting .330/.375/.567 in 25 games, during which he slugged 7 homers and drove in 17 runs. he capped the month with a walk-off homer in the bottom of the 10th inning against the St. Louis Cardinals on July 29th. He finished the season with a batting line of .285/.342/.463 in 87 games, with 15 homers and 48 RBI and was named the first baseman on the 2012 Topps All-Star Rookie Team. 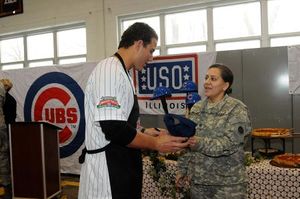 Rizzo was the first baseman and #3 batter for the Italian national team in the 2013 World Baseball Classic, going 4 for 17 with five walks, two doubles, four runs and six RBI. He was in the middle of the pack of the Azzurri in OPS but tied Chris Colabello for third on the team in runs, led in walks and was second in RBI, one behind Colabello. He came up big in the 6-5 upset of Mexico; with Italy down 5-4 in the 9th against Sergio Romo, he drove in both Stefano De Simoni and Chris Denorfia to win it. He tried to score an insurance run on a grounder by Alex Liddi but was out. His three-run double off Xavier Cedeño broke open a scoreless game with Puerto Rico in the 5th but Italy lost 4-3.

On May 12, 2013, sensing that Rizzo was the real deal, the Cubs signed him to a seven-year contract worth $41 million, indicating that he was one of the pillars around which the team would re-build. He struggled a bit that year however, as his average fell to .233, although he continued to display good power, with 42 doubles and 23 homers. He also scored 71 runs and drove in 80 and was generally the Cubs' biggest offensive threat in spite of the low batting average. He rebounded in 2014, when he hit .275 with 15 doubles and 20 home runs and drove in 49 runs during the first half. He became an All-Star for the first time, the result of winning the National League's Final Man Vote. On July 20th, he made a tremendous defensive play in a game against the Arizona Diamondbacks, lunging over a railing protecting a camera bay to catch a foul ball, but the play backfired when he then tumbled out of play, allowing baserunners to advance one base; David Peralta thus scored from third base, with what proved to be the winning run in a 3-2 D-Backs' win. In 140 games, he hit .286 with 32 homers and 78 RBIs.

Rizzo confirmed his status as one of baseball's top young starts over the next two season, 2015 and 2016. He made the All-Star team both years and in 2016 won both a Gold Glove and a Silver Slugger Award at first base. He led the NL with 701 plate appearances in 2015, the result of playing 160 games and usually hitting near the top of the line-up. He batted.278 with 31 homers and 101 RBIs that season. After taking an ofer in the Wild Card Game against the Pittsburgh Pirates that fall, he was 3 for 14 with a pair of homers as the Cubs upset the St. Louis Cardinals in the Division Series. In the NLCS, he was also 3 for 14, but with no extra-base hits as the Cubs weer swept by the New York Mets. In 2016, however, he was a key contributor to the Cubs' conquest of their first World Series title since 1908. In 155 games, he hit .292 with 32 homers and 109 RBIs while scoring 94 runs. He went only 1 for 16 in the Cubs' Division series win over the San Francisco Giants, but then had a pair of homers and batted .320 with 5 RBIs against the Los Angeles Dodgers in the NLCS. In the World Series, he went 9-for-5 (.360), with 7 runs, 3 doubles, 1 homer and 5 RBIs as one of the main contributors on offence for the Cubs.

In 2017, like many of his teammates, Rizzo started the year slowly as he was hitting only .227 at the end of May. However, he was hitting with a lot of power and drawing plenty of walks, with an OBP just below .400 by mid-June. In one of his characteristically unconventional decisions, manager Joe Maddon decided to insert him in the lead-off slot on June 13th, trying to get more production from an area that had been troublesome all year. Anthony responded by homering in each of his first two games in the role. He connected off Zack Wheeler of the Mets in his very first at-bat as the lead-off man, setting the tone for a 14-3 win, then followed that the next day by pulling the same trick against Matt Harvey, although the Cubs lost that contest, 9-4. After the game, he jokingly told the Associated Press: "I am statistically the greatest leadoff hitter of all-time. I would like to retire there just to talk smack to everyone that tries to do it." On June 16th, he almost tied the major league record with a third straight homer to lead off a game, as his drive off Trevor Williams of the Pittsburgh Pirates was first called a home run before the umpires reversed themselves and ruled it was a foul ball. Maddon, for one, did not agree and was ejected arguing the call's reversal. On August 22nd, he played one inning at third base against the Cincinnati Reds after 3B Kris Bryant was hit by a pitch and had to leave the game with the Cubs short of potential substitutes (C Alex Avila moved to first base and Rene Rivera took over Bryant's spot in the batting order, playing catcher). He did not a have a fielding chance at the position, and had previously been credited with a number of appearances at second base, although these came with a caveat. Because of the various defensive shifts used by the Cubs, Rizzo sometimes plays a position somewhere between the pitcher's mound and the first base line in a bunt situation, with the second baseman covering the first base bag; in such a situation, Rizzo is credited with playing second base, and must in fact change gloves as only one player on the field is allowed to use a first baseman's mitt. He and [Don Mattingly]] were the only two lefthanded players since the dead-ball era to have played three different infield positions. On the year, he hit .273 with 32 homers, 99 runs and 109 RBIs. However, he struggled in the postseason - like most of the Cubs' hitters - going 4 for 20 (.200) with a double and a homer in the Cubs' win over the Washington Nationals in the NLDS but just 1 for 17 in the loss to the Los Angeles Dodgers in the NLCS. Following the season, he was named the recipient of the Roberto Clemente Award in recognition of his charity work.

On February 14, 2018, Rizzo's alma mater, Marjory Stoneman Douglas High School in Parkland, FL, was the site of one of the worst school shooting sprees in U.S. history, resulting in 17 dead and many wounded. Rizzo rushed to the site in order to take part in the candlelight vigil for the victims the next day and provide some comfort to survivors. Through his foundation, he convinced some high-profile Cubs fans such as actors Bill Murray and Charlie Sheen, former basketball start Dennis Rodman and television comedian Larry David donated their time and some memorabilia for a celebrity auction in favor of the victims, with the proceeds to be turned over before the season's first game, featuring the Cubs and the Miami Marlins, on March 29th. He started the year hitting .219 in his first 6 games before going on the disabled list on April 9th because of tightness in his lower back. He blamed the injury on a bed in a hotel he had slept in when the Cubs visited Cincinnati, OH. He then fell into a bad slump upon returning to action on April 17th as he finished the month with his batting average at just .149 with 1 homer an 9 RBIs. Manager Joe Maddon decided to shake him up by having him hit first on May 1st, and he responded with a lead-off homer against the Colorado Rockies. On May 28th, he was involved in a controversial play against the Pittsburgh Pirates when he made a hard slide into home plate trying to break up a potential double play. He seemed to deviate quite a bit from the basepath and hooked the leg of catcher Elias Diaz, upending him and forcing him to make a wild throw to first base, leading to two additional runs. Pirates manager Clint Hurdle asked for a video review, but when the play was upheld, he told the media that allowing such a slide made it "open season on catchers". The following day, Major League Baseball indicated, through Chief Baseball Officer Joe Torre, that after reviewing the play, they felt that interference should have been called. While the on-field decision would stand, the statement at least provided some clarification on what was and wasn't a legal slide.