Home of the New York Yankees, 2009 to present 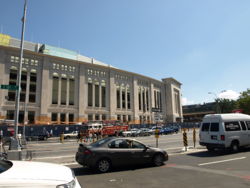 New Yankee Stadium is the $1.5 billion ballpark for the New York Yankees, that opened at the start of the 2009 season. The original Yankee Stadium opened in 1923, was extensively remodeled for the 1976 season, and closed at the end of 2008. The new stadium is located across the street from where the old one stood, on a site previously occupied by youth baseball fields. After the ballpark's completion, the old Yankee Stadium was torn down and youth fields installed in its location. 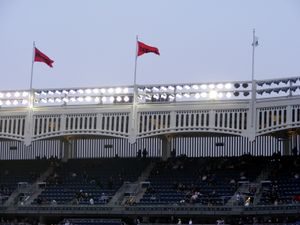 The frieze above the upper levels in the new stadium

The first regular season game in the new park was played on April 16, 2009, with the Cleveland Indians beating the Yankees 10-2 before a sellout crowd of over 48,000. The only positive note for the Yankees in that game was that the first hit and home run in the new park were collected by Yankee players, Johnny Damon and Jorge Posada respectively. However, the Indians exploded for 9 runs against the Yankees' bullpen in the 7th inning to send fans to the exits, with a two-run double by Jhonny Peralta and a grand slam by Grady Sizemore being the key blows. 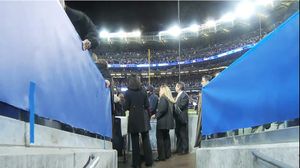 The Yankees were having trouble filling seats in the new stadium early in the season. Despite the flashy new location and the general appeal of attending a Yankees game, entire rows remained empty. Some of the more luxurious seating areas that remained empty feature cushioned blue seats with teak arm rests. While most of the cheaper seating areas were filled, the seats closest to the field costing $325-$2,500 remained empty. This prompted the club to reduce prices for these empty seats, slashing prices by up to half. [1] 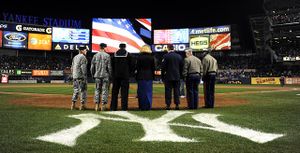 The first two games of the 2009 World Series were played in the new stadium, as well as Game 6 when the Yankees clinched their 27th World Series title.

On December 30, 2010, the ballpark renewed with a tradition that was well established at Yankee Stadium, when it hosted a college football game, the "Pinstripe Bowl", which became an annual event.

On August 8, 2013, it was announced that the National Hockey League's New York Rangers would play two outdoor games at New Yankee Stadium during the 2013-14 season. The first game took place on January 26th with the New Jersey Devils playing the Rangers. Three days later the New York Islanders hosted the Rangers in the second of the 2014 Coors Light Stadium Series. Yankee bosses Randy Levine and Lonn Trost were there representing the Yankees.

In 2015, the ballpark got its second full-time tenant as the New York City Football Club of Major League Soccer played its inaugural game on March 15th. 43,000 fans were present for the inaugural game, although in soccer configuration, the park's capacity is around 28,000, as the upper decks are closed except for special occasions (like this one). In this guise, third base and home plate are part of the pitch, while the mound is lowered in order not to interfere with the game.

After the 2018 season, in a report compiled for ESPN's Outside the Lines, the stadium's concessions were ranked the worst in the majors. Among problems listed were 34 high-level health violations during the period under study. The stadium's food-service provider reacted saying that the report mis-represented the situation and that any problems reported had been immediately corrected.

The stadium's dimensions are rather cozy, with the right field porch, situated only 314 feet from home plate, allowing some of the easiest homers in the majors. Fenway Park has its right field foul pole even closer, but the fence then moves away from the plate at a very sharp angle, meaning that a cheap homer can only be had by wrapping the ball around the "Pesky Pole"; by contrast, there is a large target area in right field for hitters to shoot for here. Not everyone is pleased with this configuration: Texas Rangers manager Chris Woodward called it a "little league ballpark" after being victimized by a Gleyber Torres walk-off homer that barely cleared the right field fence and which would have been "a easy out in 99% of ballparks" (for the record, Statcast disagreed with his assessment). The local fans, not known for taking kindly to criticism from outsiders, made it known that his views about their home park were not welcome.