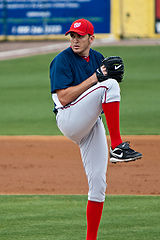 John Lannan debuted in the majors in 2007.

Lannan had a 5.44 ERA as a freshman at Siena College, but allowed only two earned runs in 5 2/3 IP in a game against #1-ranked Florida State University. As a sophomore, he improved to 7-3, 3.84 and was 7th in the Metro Atlantic Conference in ERA. In his junior year (2005), Lannan was the conference star, going 10-2 with a 2.29 ERA, leading the MAC in wins and ERA. He struck out 83 in 83 innings while allowing 62 hits and 28 walks. Surprisingly, he did not win Pitcher of the Year honors nor make the All-Conference team. He was 31st in NCAA Division I in ERA. The Washington Nationals took him in the 11th round of the 2005 amateur draft. Lannan was signed by scout Dana Brown and made his pro debut that summer.

The tall left-hander had a busy year in 2007. He debuted with the Potomac Nationals and went 6-0 with a 2.13 ERA and .179 opponent average in 8 games. Promoted to the Harrisburg Senators, he was 3-2 with a 3.35 ERA in six outings before he moved up to the Columbus Clippers. His record there was 3-1, 1.75 to push his overall record to 12-3, 2.35 with a .209 opponent batting average. That earned him a promotion to the majors to replace Chris Booker on the roster. He was the 4th Siena alum to play in the major leagues.

He had a rocky debut in The Show, facing the Philadelphia Phillies on July 26th. He allowed a leadoff single in the first to Jimmy Rollins, walked Shane Victorino, then allowed a run-scoring single to Chase Utley before striking out Ryan Howard for his first out. He allowed six hits, five runs and 2 walks in 4 1/3 innings while Howard was his lone strikeout. In the fifth inning, he plunked Utley and Howard in back-to-back plate appearances and was ejected from the contest by umpire Hunter Wendelstedt. Chris Schroder relieved him. The Nationals rallied to win, though, and Lannan got a no-decision. After the game, Utley was diagnosed with a broken right hand. Lannan made 5 more starts for the Nats that season, ending the year at 2-2, 4.15, but walking 17 batters while striking out only 10 in 34 2/3 innings.

John became a regular member of Washington's starting rotation in 2008, making 31 starts with a record of 9-15 and a 3.91 ERA. His record was misleading (Washington was 59-102 overall), as his ERA+ was a solid 110, he only gave up 172 hits in 182 innings, and reversed his K/W ratio from the previous season, striking out 117 against 72 walks. He was third in the 2008 NL in losses, two behind co-leaders Barry Zito and Aaron Harang. He was named to the 2008 Topps All-Star Rookie Team in recognition of his solid season.

In spite of his durability and relative success over the previous four seasons, Lannan failed to make the Nationals squad out of spring training in 2012. He had seemed a shoo-in to be a member of the starting rotation after Chien-Ming Wang was placed on the disabled list with an ankle injury, but was beaten out of a job by Ross Detwiler, a former top draft choice. Far from being the team's ace, he had by then been passed on the depth chart by Strasburg, newly-acquired Gio Gonzalez and Edwin Jackson, as well as Jordan Zimmermann and Wang. The Nationals had anticipated the problem and had discussed a trade for Lannan with a number of teams, but to no avail; thus he headed to the AAA Syracuse Chiefs to start the year. He went 9-11, 4.30 in 24 starts for Syracuse, but was only called up to DC for a couple of emergency starts in late July and early August, winning both. On September 12th, he was inserted into the Nationals' starting rotation when ace Stephen Strasburg was shut down for the season in a controversial decision. He won his start that day, 2-0 over the New York Mets, to improve to 3-0, 2.41 on the year. In his next start however, in the second game of a doubleheader on September 19th, he was roughed up by the Los Angeles Dodgers for 6 runs in 3 2/3 innings, ending up with a no-decision. A win in that game would have clinched a postseason spot for the first time in Nationals history. He finished the year with a record of 4-1, 4.13 in 6 starts for the Nats but was left off the team's postseason roster. Realizing that there was little future for him in Washington, he signed as a free agent with the Philadelphia Phillies on December 15th.