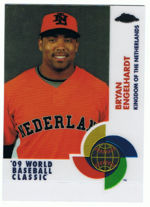 Bryan Engelhardt has been an outfielder in the Hoofdklasse. He was the first two-time winner of the Jacques Reuvers Award. He has led the Hoofdklasse in home runs four times. He has played in both the Olympics and World Baseball Classic. He is the older brother of Rachid Engelhardt and son of Stanley Engelhardt.

Engelhardt was in talks with the Baltimore Orioles when younger, but did not impress in the Venezuelan Summer League and went to Holland instead. Bryan debuted in Hoofdklasse in 2002 with PSV. He started off on a strong note, homering against Ruan Klink in his first at-bat. He wound up tying for sixth in the league with two triples. He starred in 2002 Haarlem Baseball Week, hitting .389 and winning his first Jacques Reuever Award, beating out the likes of Carlos Quentin, Dustin Pedroia and Huston Street. He also hit .429/.600/.571 for the Dutch national team in the 2002 Intercontinental Cup.

In 2008, Engelhardt was decked with a 10-game suspension for his role in a large brawl between Kinheim and Neptunus on May 18. Bryan hit .222/.300/.389 for Kinheim as they won the 2008 European Cup in Grosseto. He had the lowest average of the team's starters but hit their only home run.

Engelhardt was the top Dutch hitter in the 2008 Olympics, hitting .278/.381/.667 as their starting left fielder. His OPS was 392 points better than the team's #2 performer, Dirk van 't Klooster. Bryan hit two homers, solo shots off of Guogiang Sun and Yadier Pedroso. He tied Alfredo Despaigne for 5th in the preliminary rounds in slugging and tied Despaigne, Mike Saunders, Chih-Sheng Lin and Nick Weglarz for second in homers, one behind Dae-ho Lee.

Engelhardt hit .294/.392/.504 with 30 RBI in 34 games in the 2008 Hoofdklasse while moving to first base primarily. He tied Martijn Meeuwis for 6th in the league in slugging, tied for third in home runs (5, tying Eugène Kingsale and Fausto Alvarez, one behind the co-leaders), tied Mark Duursma for 7th in RBI (30) and tied for 8th in doubles (10, even with Mark Duursma, René Cremer and Sidney de Jong). He was 4 for 13 in the playoffs. In the 2008 Holland Series, he went 0 for 2 with a walk and a run; on the scoring play Amsterdam catcher Sidney de Jong was hurt, leaving him out of the Series. Bryan missed the rest of the Series due to a suspension given out during the playoffs.

In the 2009 World Baseball Classic, Bryan was the second-best Dutch hitter after de Jong and better than the three major leaguers on the Netherlands squad. He hit .294/.294/.529 as the main left fielder. He hit the only Dutch home run in six games in the tournament, a solo shot off Matt Lindstrom in a loss to the US.