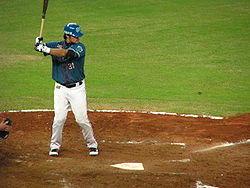 Ngayaw Ake (formerly known as Chih-Sheng Lin before switching to his aboriginal name rather than his Chinese one) has been a top infielder and record-setter in the Chinese Professional Baseball League. He is the cousin of Tai-Chi Kuo and Tai-Yong Kuo. He has won four home run titles, one RBI title, one stolen base title and one MVP.

Lin produced at a .311/.394/.550 rate in 2007 with 16 home runs. He again won Best Ten honors and also took home a Gold Glove. In the 2007 Asian Championship, he went 3 for 11 while manning second base and shortstop. In the 2007 Baseball World Cup, Lin batted .263/.333/.474 with 8 runs in 9 games as Taiwan's starting shortstop. He was involved in a controversial 1-0 win over Italy. With two outs in the bottom of the 9th and two on, Lin got a 2-2 count from Chris Di Roma. He then got the benefit of a call on a check swing that drew much criticism from Italian fans. With a second chance, Lin singled home Chun-Chang Yeh with the game-winner. It was his second walk-off hit in a major international event in a two-year period.

Lin was at the center of a major brawl on April 4. After he and a teammate were both called out by the first-base umpire during close plays, Lin charged the umpire to hit him and promptly got ejected. After another dispute, a bench-clearing brawl broke out. Lin was suspended indefinitely and fined 100,000 National Taiwan Dollars. He was back in action a month later.

Lin batted .273/.407/.636 with 2 doubles, 2 home runs and 6 runs in 7 games in the 2008 Olympics to lead Taiwan's offense. He scored both Taiwan runs in their loss to the US, including a solo homer off of Brandon Knight. He went deep off of Mike Johnson in Taiwan's one-run win over Team Canada. Prior to the Medal round, he was 7th in the Olympics in slugging, tied for third in runs (even with Nate Schierholtz, Brian Barden and Michel Enríquez‎ and trailing Frederich Cepeda and Alexei Bell) and tied for second in homers (even with Bryan Engelhardt, Nick Weglarz, Alfredo Despaigne and Mike Saunders and one behind Dae-ho Lee).

On April 1, 2010, Lin hit his 100th CPBL homer, to become the quickest CPBL player to that mark. Moving to first base that year, he had another great campaign at .312/.380/.515 with 21 homers and 79 RBI in 117 games. He led the league in RBI (one more than Tai-Shan Chang), home runs (5 more than Chang), total bases (128, 15 more than Chang) and slugging (34 points over Cheng-Min Peng). He was also second in runs (71, 2 behind Chang), OBP (.071 behind Peng), OPS (behind Peng), fourth in average (behind Peng, Yi-Chuan Lin and Chang) and tied for fourth in doubles (with Chang). He did set a new league strikeout record, finishing with 102, 19 more than runner-up Fu-Hao Liu. He broke Kai-Fa Chen's record. Despite winning two-thirds of the Triple Crown, he failed to make the Best Ten this year as Peng was picked at 1B.

Lin hit .343/.378/.543 for Taiwan in the 2010 Intercontinental Cup, with 5 runs and 6 RBI in 8 games. In the Bronze Medal game, he hit cleanup and played DH for Taiwan and started 4 for 4. Down 3-2 to Italy in the bottom of the 9th, he came up with one on and one out but struck out on three pitches from Alessandro Maestri. He helped Taiwan win a Silver Medal in the 2010 Asian Games, including a homer off Japan's Manabu Mima in the semifinal win.

Lin was Taiwan's starting shortstop in the 2013 World Baseball Classic Qualifiers, going 5 for 11 with two doubles, two walks, two steals, five runs and four RBI. He tied Peng and Yung-Chi Chen for the team lead in runs and was second in average and hits to Chien-Ming Chang. In the finale against New Zealand, he got Taiwan's first two runs in a win against future major leaguer John Holdzkom. In the 2013 World Baseball Classic itself, in which he was 4 for 18 with two doubles, two walks, two runs and two RBI as Taiwan fell in the second round.

At age 33, Lin surged in 2015, producing at a .380/.469/.689 clip with 30 doubles, 31 home runs, 30 steals (more than double his prior high of 14), 106 runs and 124 RBI. He topped Yi-Chuan Lin's old RBI record but Yi-Chuan Lin had 126 in 2015. Chih-Sheng Lin became the first 30-30 player in CPBL history. He was second in runs (3 behind Kuo-Hui Kao (formerly Kuo-Hui Lo, listed above), was 4th in hits (156, between Kuo-Hui Kao and Chien-Ming Chang), was second in doubles (one shy of Chun-Hsiu Chen), was third in home runs (8 behind Kuo-Hui Kao), was second in steals (two behind Chih-Ping Lin), led in OBP (.023 ahead of Hung-Yu Lin), led in slugging (.060 ahead of home run king Kuo-Hui Kao), was second in average (.003 shy of Hu) and tied Peng for the walk lead (65). In game 5 of the 2015 Taiwan Series, he took Mike McClendon deep for his 10th career Taiwan Series home run, breaking Min-Ching Lo's record. He finished the Series with 14 hits, 7 runs, 3 home runs and 11 RBI as Lamigo rallied from a 3-1 deficit to beat the Chinatrust Brothers for their third title in four years. Lin won his second Taiwan Series MVP, beating out game 7 no-hit ace Pat Misch. He was the third player to win the award twice, following Min-Ching Lo and Luther Hackman. He won his sixth Best Ten pick at short, as many as the next two players in CPBL history combined (Epy Guerrero Jr. and Chao-Hang Cheng each having won it three times). He also won the CPBL MVP award.

He was on Taiwan's roster for the 2015 Premier 12. Starting at second base, he hit .348/.375/.913 with four homers, six runs and six RBI in five games while handling 22 chances error-free. He went deep off Italy's Luca Panerati, Canada's Kyle Lotzkar and Andres Santiago (Puerto Rico) but his biggest blow came against Cuba; with a 1-1 tie in the 8th, he hit a three-run blast off Danny Betancourt to win it. He led the first Premier 12 in home runs (one ahead of Tyler O'Neill) and was second in slugging to Juan Apodaca even though Taiwan was eliminated in the first round and thus wound up with fewer games than some of the teams. He lost out the All-Star spot at 2B to the US's Adam Frazier.

Lin hit .337/.420/.648 in a high-offense 2016 CPBL campaign. He missed the top 10 in average but tied Kuo-Hui Kao for the home run lead, was second in RBI (one behind Hung-Yi Lin), tied Guo-Long Luo for third in runs, was 4th in walks (53) and was 4th in slugging (between Hung-Yu Lin and Kuo-Hui Kao). His steal total dropped back towards his older levels at 8. He fielded .948 in 88 games at 2B and .974 in 16 at 1B. He made the Best Ten at second base, his 7th total best Ten pick. In game 3 of the 2016 Taiwan Series, he hit three homers, a three-run shot off Scott Richmond, a solo dinger off Ming-Jin Tsai and a two-run blast off Fu-Te Ni but it was not enough in a 9-8 loss. It was the first three-homer game in Series history. The Brothers lost the Series. He was with Taiwan for the 2017 World Baseball Classic.