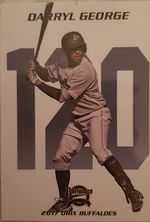 Darryl George has played in Australia, the US and Japan and for the Australian national team.

He also played for Australia in the 2019 Premier 12, He hit .167/.211/.222 for Australia while handling 17 chances error-free as their third baseman. He had a double off Shun Yamaguchi and two singles off Eduardo Vera. He actually outhit his teammates as Australia batted .147/.194/.225. [6] On January 30, 2021, he set two ABL records when he hit two grand slams and drove in ten against the Brisbane Bandits; he broke Luke Hughes and Denny Almonte's record of eight RBI and the old record of one grand slam. [7]