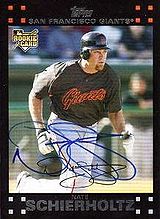 Originally a third baseman, Nate Schierholtz was selected by the San Francisco Giants in the second round of the 2003 amateur draft. He was signed by scout Matt Nerland and made his pro debut that year. He began the season with the AZL Giants, with whom he hit .400 before being promoted to the Salem-Keizer Volcanoes, where he continued to put up good numbers, hitting .306 with 3 homers and 29 RBIs. He started the next season with the Hagerstown Suns and hit .296 with 15 home runs and 53 RBI, earning a spot on the South Atlantic League All-Star team. In mid-June, he was promoted to the San Jose Giants, where he hit .295 with 3 homers and 31 RBI. He returned to San Jose in 2005, was converted to the outfield, and hit .319 with 15 home runs and 86 RBIs to help lead the club to the California League championship.

Schierholtz played for the Connecticut Defenders in 2006 and hit .270 with a team-high 14 homers and 54 RBI. He began the next year with the Fresno Grizzlies and hit .347 with 4 home runs and 33 RBI before being called up by the Giants. He quickly became the team's regular rightfielder, hitting .342 in his first dozen games in the majors.

Schierholtz replaced the injured Colby Rasmus on the Team USA roster for the 2008 Olympics. He was the team's starting right fielder and hit .216/.275/.405 with 7 runs in 9 games for the Bronze Medal winners. Nate hit a solo homer off of submariner Tae-hyun Chong in the USA's one-run loss to South Korea, the Gold Medal winner. He doubled in one run off of Luis Miguel Rodríguez then scored in a loss to tie the game in an extra-inning loss to the Cuban national team. He was involved in a controversial win over the Chinese national team when he collided with catcher Yang Yang one inning after starting catcher Wei Wang was injured in a collision with Matt LaPorta. In the preliminary round, Schierholtz tied for third with 6 runs (even with Michel Enríquez‎, Chih-Sheng Lin and Brian Barden, trailing Frederich Cepeda and Alexei Bell) and tied for 4th with 6 RBI, equal with Giorvis Duvergel, Atsunori Inaba, Matthew Brown, Takahiro Arai and Bell.

After only playing for the Giants from his debut in 2006, and being a part of the World Series-winning team in 2010, Schierholtz was one of three players dealt by the Giants to the Philadelphia Phillies on July 31, 2012 in return for OF Hunter Pence; the others were both minor leaguers, C Tommy Joseph and P Seth Rosin.

On August 5, 2016, while playing in the minor leagues, he was suspended for 80 games for testing positive for a PED.