Note: This page is for 2000s infielder Matthew Brown; for others with the same name, click here. 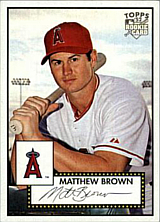 "'What's a pone tony?' he [Matt Brown] asked me a few minutes into the film [Pootie Tang]. 'He's speaking gibberish,' I replied. 'No, he's not... it's Hindu or something.' 'It's definitely gibberish. That's the joke.' 'No... it's not. I swear I've heard people say pone tony. And I know I've heard sa da tey before. I'm serious. This is gonna drive me nuts.' 'It sounds familiar because he's switching the first letters of the words. You're thinking of a tone pony.' 'No... I'm not,' he whispered. 'I want to know what he's saying.' Perhaps all the talk in the parking lot about college had gotten Brown in the mood to learn something. And since he'd just pissed on my leg, I decided to have some fun with him..." - Matt McCarthy, from his memoir Odd Man Out

Matt Brown made his major league debut in 2007. He saw action in two seasons with the Los Angeles Angels.

Brown played for the USA in the 2008 Olympics and had their second-best OPS (trailing Jason Donald), hitting .281/.390/.563 while rotating between third base, first base and designated hitter. He drove in 10 runs in 9 games. He had 3 RBI in their loss to the South Korean national team, which took home Gold. His solo homer off Shairon Martis got the scoring going in a victory over the Dutch national team. Brown hit a 3-run homer off of Tsuyoshi Wada and later scored another run in the 8-4 Bronze Medal game win against Japan. In the opening round, Brown's 6 RBI tied Nate Schierholtz, Giorvis Duvergel, Atsunori Inaba, Alexei Bell and Takahiro Arai for 4th, trailing Alfredo Despaigne, Dae-ho Lee and Michel Enriquez.

While trying to catch on with the Angels in spring training 2009, a former teammate's memoir painted Brown as a bit of a rube. Odd Man Out: A Year On The Mound With A Minor League Misfit, penned by former Provo Angels teammate (and pitcher) Matt McCarthy, featured tales in which Brown was punched in the groin by the son of former CNN host Larry King at a game as well as the remembrance of a bus trip where McCarthy claimed Brown believed the gibberish spoken by characters in the 2001 film Pootie Tang was actually "Hindu". Brown denied all incidents he was written to be involved in. He would hang around professional baseball through 2012, never reaching the bigs again.