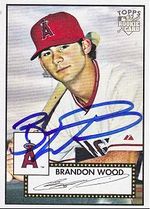 A first-round draft pick of the Anaheim Angels out of high school in the 2003 amateur draft, he was signed by scout Jeff Scholzen and made his pro debut that summer. While Wood was known more for his defense than hitting, he developed quickly and was named Minor League Player of the Year by The Sporting News in 2005 while playing for the Rancho Cucamonga Quakes and Salt Lake Stingers. He hit .321 with 43 homers and 115 runs batted in for Rancho Cucamonga. He led all the minor leagues in doubles (53), home runs and total bases (370). The home run lead earned him the Round-Tripper Award. He led the California League with 109 runs and his 101 extra base hits (98 for the Quakes, 3 for the Stingers) were the most in the minor leagues since Len Tucker in 1956 - in the 48 years after Tucker, no one else had reached 100. Wood followed up his great season with a four-homer game in the Arizona Fall League. Wood's line at class A was .321/.383/.672 and in AAA that year he hit .316/.316/.526 in 4 games.

In 2006, Brandon continued to hit as his 71 extra-base hits were second in the minor leagues behind only Brooks Conrad despite missing time playing for the US National team in the qualifier for the 2008 Olympics. He was again named the Angels' Minor League Player of the Year after batting .276/.355/.552 for the Arkansas Travelers. He hit 42 doubles, 25 home runs and drove in 83 in 118 games, striking out 149 times (leading the Texas League) and stealing 19 bases in 22 tries. His 27 errors tied Mike McCoy for the TL lead at short but he also led in putouts (219) and tied for the lead in double plays (99). He made the league All-Star team and was rated the #2 prospect in the circuit by Baseball America.

Wood played for Team USA in the 2006 Americas Qualifying tournament for the 2008 Olympics and hit .182/.308/.455 as the team's lightest offensive threat; they won the tourney anyways. Wood's two-run homer off of Pedro Luis Lazo broke a 5-5 tie in the finale and helped the US stun Cuba.

Although Wood hadn't hit much in the majors, in July 2010 when he couldn't clear waivers to go to the minors, the Angels sent down the player with the highest batting average on the team, Kevin Frandsen, rather than lose Wood to another team claiming him.