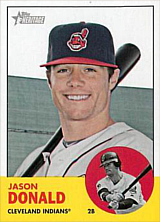 Shortstop Jason Donald was on the US roster for the 2008 Olympics when they won Bronze. He made his major league debut with the Cleveland Indians in 2010.

Donald played high school baseball for his father, Tom. He set school records in hits, homers and runs. He was also a multi-position football player, earning All-City honors as a senior. He hit .468 as a junior. As a senior, he batted .534 with 52 runs and 11 home runs and was named a second-team All-American by Baseball America; Eric Duncan, Ian Stewart and Brandon Wood were the three infielders chosen as first team above him. The Anaheim Angels chose him in the 20th round of the 2003 amateur draft; he fell that far due to his strong college commitment.

Going on to college, Jason hit .322/.381/.475 as a freshman for Arizona. Baseball America named him a second-team freshman All-American at SS, behind Chris Valaika. Collegiate Baseball picked him for their first-team freshman All-American squad. He set the Arizona Wildcat record for hits (84) by a freshman. Donald hit .333 with a home run in the 2004 College World Series as Arizona fell in 3 games. In the Cape Cod League, he hit .206/.281/.304 for the Cotuit Kettleers.

Donald debuted with the Batavia Muckdogs, producing at a .263/.347/.352 rate with 12 steals in 13 tries and a .959 fielding percentage at short. One negative was his .159 average against left-handers, but he hit .313 against right-handers in a reverse split. He led New York-Penn League shortstops in fielding percentage.

Donald opened 2008 with the Reading Phillies. He hit .307/.391/.497, missing time for the Olympics. He started at short and hit 9th for the US in the 2008 Futures Game. He made a throwing error on a potential double play grounder in the first inning, allowing Elvis Andrus to reach; Andrus would eventually score the winning run in a 3-0 World victory. In the third, Donald grounded back to pitcher Hector Rondon in his first at-bat. Facing Julio Pimentel in the 5th, he singled to left to put two men on with two out but was stranded. Valaika replaced him at short the next inning. Donald finished 5th in the Eastern League in average, between Zach Daeges and Will Rhymes, and was named the All-Star shortstop. Donald was the USA's shortstop and top hitter when they won Bronze at the 2008 Olympics. He hit .381/.536/.571 and delivered a 2-run homer in the 8-4 Bronze Medal game win over Japan.

In 2009, Jason batted .236/.297/.332 in a disappointing 51 games for the Lehigh Valley IronPigs. Donald was one of four prospects (along with Carlos Carrasco, Jason Knapp and Lou Marson sent by the Phillies to the Cleveland Indians in return for Clif Lee and Ben Francisco at the trading deadline in 2009. He was 9 for 35 in 10 games for the Columbus Clippers following the trade. Donald began 2010 back with Columbus and hit .277/.396/.423 with 10 steals in 12 tries, 21 walks and 27 runs in the first 37 games while moving to second base primarily.

He got his first chance to play in the majors in mid-May, 2010 when Indians starting shortstop Asdrubal Cabrera broke his wrist. In his debut on May 18th, he singled off David Price in his first MLB at-bat and went 2 for 3 against the Tampa Bay Rays for the day. He followed with a 1 for 15 swoon. He figured in one of the most striking moments of the season on June 2nd, when he was the 27th batter to face the Detroit Tigers' Armando Galarraga, who had retired the previous 26 and was one out away from a perfect game. Donald hit a dribbler to first baseman Miguel Cabrera, who flipped the ball to Galarraga at first base, seemingly in time to complete the historic effort; but umpire Jim Joyce saw otherwise, Donald was credited with a controversial infield single, and Galarraga had to settle for a one-hit shutout.

On December 11, 2012, Donald was traded to the Cincinnati Reds alongside OF Shin-Soo Choo in return for OF Drew Stubbs and SS Didi Gregorius. He did not return to the big leagues.