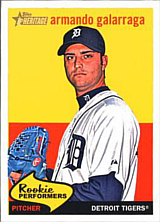 Armando Galarraga was signed by the Montreal Expos and scout Fred Ferreira in 1998. He made his pro debut with the San Joaquin club in 1999. He then played for the Cagua team in 2000 before coming stateside with the GCL Expos in 2001-2003.

On June 2, 2010, pitching for the Detroit Tigers, Galarraga came about as close to pitching a perfect game as possible, before settling on a one-hitter. Facing the Cleveland Indians, he retired the first 26 batters of the game before facing Jason Donald one out away from making history. Donald hit a soft grounder to first base, which was fielded by 1B Miguel Cabrera, who relayed the ball to Galarraga who moved to cover the bag. Umpire Jim Joyce called Donald safe, even though replays clearly indicated that the throw had beaten the runner to the base, but this was before the introduction of instant replay for instances other than home runs, so the call stood. Joyce acknowledged after the game that he had made a mistake on the call. Donald was credited with an infield single, and Galarraga retired the next batter to complete the 3-0 win - his first major league shutout. Had he been successful in completing the perfect game, it would have been the third in the major leagues in less than a month, following those of Dallas Braden on May 9th and Roy Halladay on May 29th. A lot of outrage was expressed at the outcome of this game, with many fans and sportswriters asking that the Commissioner intervene to reverse Joyce's call and give Galarraga the perfect game he deserved. Nothing was done, however, as it would have gone against all precedent to reverse an umpire's call post facto, no matter how egregiously wrong it had been. Others argued that in any case, Galarraga would become more famous for this wrong call than if he had completed the perfecto without a hitch. The game was instrumental in getting instant replay adopted after the 2011 season, as soon as it could be included into the Collective Bargaining Agreement.