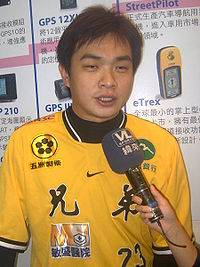 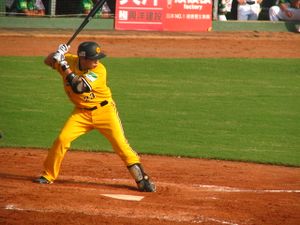 Cheng-Min Peng has won five batting titles in the Chinese Professional Baseball League. An outfielder, Peng has starred for the Brother Elephants. He formed the "Three Musketeers" with teammates Chih-Yuan Chen and Feng-An Tsai. He has a career average of .348 through 2007.

Peng first broke onto the international scene with the 1995 World Junior Championship, during which he hit .419 and slugged .710 for Taiwan, with 9 RBI. He was second in the tournament in average behind Davide Dallospedale and possibly led in home runs (3). He was named to the All-Tournament team at third base and Taiwan won Silver. Brad Wilkerson beat him out for tournament MVP honors.

Peng improved even further in 2003 when the 24-year-old hit .355/.455/.585 and led the CPBL in both doubles (25) and batting average. His 83 runs were one behind leader Chih-yuan Chen. He was Player of the Month in May, July and September. He made the Best 10 as an outfielder. Peng also played for Taiwan in the 2003 Asian Championship.

Peng remained sharp in 2005, hitting .339/.445/.544 for his third straight batting championship. He led in average by 15 points over Victor Rodriguez and made his 4th straight Best Ten, his third in a row as an outfielder. Unfortunately, his season was cut short by a wrist injury.

Peng hit .256/.383/.333 in the 2007 Baseball World Cup with 7 runs and 7 RBI in 10 games. He was error-free in right field and drew 7 walks. He scored one of Taiwan's runs and drove in another in their 6-3 quarterfinal loss to the Dutch national team. In the 2007 Asian Championship, he was 4 for 12 with a walk and four runs, the most on Taiwan and two behind tournament leader Young-min Ko.

Peng won the 2008 CPBL batting title at .391, .043 ahead of runner-up Kuan-Jen Chen. His 23 steals were one behind leader Sheng-Wei Wang. He set the all-time batting average record, breaking Jay Kirkpatrick's 10-year-old mark by .004. His record stood eight years before Po-Jung Wang broke it.

In the 2009 World Baseball Classic, Peng was 1 for 6 with a walk for Taiwan. He drove in their only run of the tourney, singling in Che-Hsuan Lin in the 6th inning of an upset loss to China.