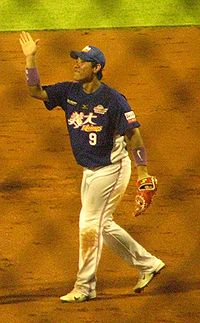 Lin hit .130/.231/.174 for Taiwan in the 2008 Final Olympic Qualification Tournament as the starting third baseman. Despite his struggles, they won a spot in the 2008 Olympics. Lin had a couple defensive gaffes in a loss to the South Korean national team. In the second inning, he did not get to a grounder by Dae-ho Lee that reporters said was within his range. Later in the inning, he again did not get to a ball in close range of third hit by Jin-man Park. The two plays, coupled with a Che-Hsuan Lin miscue, contributed to two Korean runs and the win.

Lin was the top pick in the 2007 CPBL draft, taken by the Sinon Bulls. He had played for the amateur Fubon Bull previously. He did not play in 2008, as he was fulfilling his military commitment. In late 2008, he announced that he didn't want to play for Sinon when he came out of the military and that he wanted to remain an amateur. Lin changed his mind and signed with Sinon in March 2009, inking a deal with a signing bonus equivalent to $145,000. That was the second-largest bonus in CPBL history, behind Chung-Nan Tsai and even with Chang-Wei Tu, Chih-Yuan Chen and Yi-Cheng Tseng.

Lin was 0 for 8 with two strikeouts as one of Taiwan's worst performers in the 2009 World Baseball Classic.

Lin had a great pro debut. Manning first base and hitting 7th, he was 3 for 4 in Sinon's 2009 opener. He reached 100 hits in 249 AB and 62 games, the fastest player to that mark in CPBL history to that point. On August 13, he set new CPBL rookie records for RBI (77, surpassing Tai-Shan Chang and hits (119, breaking the mark held by Chih-Wei Shih). He hit .348/.395/.543 for the 2009 CPBL campaign and drove in 113 runs, breaking Tilson Brito's CPBL record. He finished 4th in average (behind Wu-Hsiung Pan, Cheng-Min Peng and Wilton Veras), second in hits (169, behind Veras) and third in home runs (18, behind Chih-Sheng Lin and Chin-Feng Chen). He won a Gold Glove at first base and made the Best Ten. He was named Rookie of the Year and MVP, the third player and first position player ever to accomplish that double honor; En-Yu Lin had been the last pitcher to pull off the feat (in 2005).

In 2010, he was very good but not as dominant as the prior year; .330/.374/.453, with only 8 homers and 55 RBI. He became the fastest player in CPBL history in 200 hits (625 plate appearances, 577 at-bats, passing Hector Roa) and the fastest local player to 300 hits (224 games, edging Kuei-Chang Tseng, five short of Luis de los Santos's league mark). He tied for 6th in homers, was 9th in RBI, was second in average (27 points behind Peng), tied Chang for third in OBP, was 4th in slugging (between Chang and Chen-Yu Chung) and ranked 5th in OPS (between Fu-Hao Liu and Cheng-Wei Chang). The Bulls were swept by the Brother Elephants in the 2010 Taiwan Series; in game one, they were down 3-2 with two on and two out in the 8th but Lin was retired by Orlando Román. Lin represented Taiwan in the 2010 Asian Games and helped them to a Silver Medal. Lin hit .318/.383/.462 in 2011, finishing among the CPBL leaders in average (tied for 8th with Chung), doubles (29, tied for third with Kuo-Ching Kao and Chung), OBP (tied for 6th with Chih-Sheng Lin), slugging (5th, between Chung and Ssu-Chi Chou) and OPS (7th, between Chung and Chou).

In the 2013 World Baseball Classic Qualifiers, he went 3 for 9 with 3 doubles, 3 runs, a walk and 5 RBI to help Taiwan advance to the 2013 World Baseball Classic. He finished among the tournament leaders in doubles (1st) and RBI (4th, one behind Scott Campbell, Chien-Ming Chang and Yung-Chi Chen). He saw less action in the Classic itself, as Taiwan went with a starting infield of Peng (1B), Yen-Wen Kuo (2B), Chih-Sheng Lin (SS) and Yung-Chi Chen (3B) with Chou at DH. He got one start, hitting 7th and playing DH against Australia. He grounded out in the second versus Chris Oxspring and in the third against Dushan Ruzic then was lifted for pinch-hitter Hung-Yu Lin. In a win over the Dutch national team, he batted for Kuo and flew out against Shairon Martis. In a loss to Japan, he batted for Chiang-Ho Chen to lead off the bottom of the 9th. With the score 3-3, he singled off Kazuhisa Makita and Han Lin pinch-ran but failed to give Taiwan the winning run.