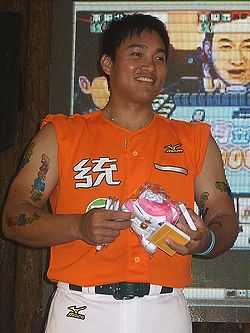 Kuo-Ching Kao is a top hitter in the Chinese Professional Baseball League and has played for Taiwan's national team on and off for over a decade. He has won one CPBL MVP and one Taiwan Series MVP award. His brother Chien-Lung Kao also played in the CPBL.

In 2006, Kuo-Ching produced at a .282/.323/.381 clip as the Lions first baseman. His career blossomed in 2007, when he hit .358/.397/.560 with 20 home runs and 89 RBI. He was third in the league in average, trailing Chin-Feng Chen and Cheng-Min Peng. He was 4th in home runs behind Tilson Brito, Chen and Peng. He was second in RBI behind Brito. He won the MVP award, was named as the All-Star 1B and won a Gold Glove in being the league's most-honored player. For MVP, he beat out Brito, the new home run record holder and Chen, a former major leaguer and the batting titlist. Kao was not without records of his own - he had 152 hits, breaking the old record by nine (Kuei-Chang Tseng may have been the record-holder). He added a grand slam in the 2007 Taiwan Series, which the Lions won. Kao's hit record only lasted two years until the league expanded it schedule; Wilton Veras and Yi-Chuan Lin both passed him in 2009.

Kao was with Taiwan's national team in the 2007 Asian Championship, going 1 for 6 with a walk, triple and sacrifice fly. He was 0 for 8 in the 2008 Final Olympic Qualification Tournament though he did reach three times by walk or hit-by-pitch. Taiwan still earned a spot in the 2008 Olympics.

He failed to make Taiwan's squad for the 2013 World Baseball Classic as they went with Yung-Chi Chen at 3B, Cheng-Min Peng at 1B and Bing-Yen Lee as a backup corner infielder. His regular season numbers fell some more, as he hit .294/.331/.383 with 6 homers and 53 RBI and didn't make the top 10 in the 2013 CPBL in any key area. On September 17, he homered off Hung-Wen Chen to become the 9th CPBL player to 500 career runs. He picked it up in the 2013 Taiwan Series, going 7 for 15 with 5 runs and 4 RBI in a sweep of the EDA Rhinos. His RBI double off Nick Green in game 2 tied it as the Lions rallied to win, and he had 3 hits in game 4, an extra-inning clincher. He was named Taiwan Series MVP.