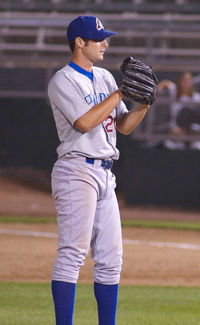 Alessandro Maestri made it to Nippon Pro Baseball in 2012, the first European-raised pitcher to do so. He has played for the Italian national team.

Maestri played for the Italian junior national team in the 2002 World Junior Championship, going 0-2 with a 7.26 ERA in two outings. Maestri was 3-1 with a save and 2.97 ERA in Serie A1 in 2005, pitching for T&A San Marino and helping them reach the finals, in which he won his lone decision. He was signed by the Chicago Cubs that season, making him the first player from the Tirrenia Academy to be signed by a Major League Baseball team.

In the 2006 World Baseball Classic, Maestri relieved in two games. He retired two of the three batters he faced, but gave up a home run to the third, Moises Alou. He debuted in the US that season with the Peoria Chiefs, going 4-3 with a save and a 3.80 ERA in 22 games.

Maestri had a 2.25 ERA in two relief stints for Italy in the 2007 European Championship, in which they finished a disappointing 7th. Maestri had a rough time in the 2007 Baseball World Cup, with a 7.26 ERA. He did close up Italy's first win ever against a Team USA that used professional players, walking the bases full before striking out Jayson Nix to end the contest.

Maestri became a starting pitcher in 2008. He was 5-3 with a 3.69 ERA and 66 K in 78 IP for the Daytona Cubs and appeared in the Florida State League All-Star Game. He was then promoted to AA with the Tennessee Smokies. He became the first Italian-born and -raised player to make it to AA but got no higher while Alex Liddi passed him and became the first Italian big leaguer. He allowed 8 runs 11 innings for the Smokies that year.

He moved to the independent Lincoln Saltdogs for 2011 and posted a 8-6, 5.72 record. He hit 17 batters, tying Nick Schumacher for the American Association lead. For 2012, he signed with Japan's Kagawa Olive Guyners of the independent Shikoku-Kyūshū Island League. He excelled for Kagawa, going 2-0 with 12 saves and a 1.24 ERA in 31 games pitched. That was good enough to get the interest of the Orix Buffaloes, who signed him. After a stint in ni-gun, he was called up. Italy-born, US-raised Steven Rum was the only Italy-born pitcher to appear in Nippon Pro Baseball previously, but no player raised in Europe had appeared before in NPB.

In his NPB debut, August 12, 2012, Maestri turned in a fine outing against the Chiba Lotte Marines, beating them 5-1; he allowed one run on four hits and one walk in 6 1/3 innings, while striking out five.